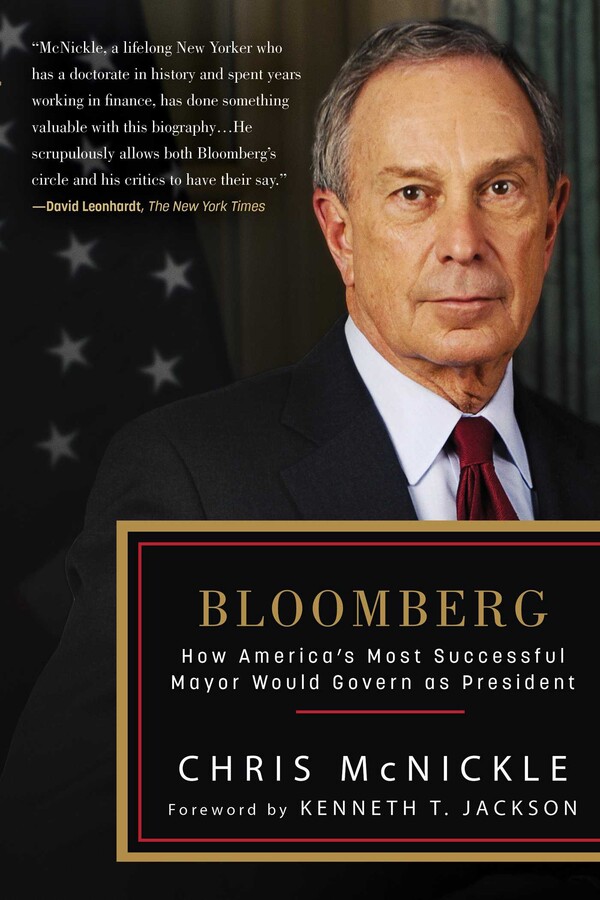 How America's Most Successful Mayor Would Govern as President

Examine the Bipartisan Legacy of a Remarkable Billionaire Politician
Bloomberg: How America’s Most Successful Mayor Would Govern as President tells the story of how one of America’s most successful entrepreneurs was elected mayor of New York City and what he did with the power he won.

Michael Bloomberg’s stunning victory against all odds just weeks after the 9/11 terrorist attack left him facing challenges unlike any mayor in history. For the next twelve years, he kept the city safe, managed budgets through fiscal crises, promoted private sector growth, generated jobs, built infrastructure, protected the environment, supported society’s cultural sensibilities, and achieved dramatic improvements in public health. Bloomberg was an activist executive who used government assets boldly and wisely for the greatest good, for the greatest number of people.

His time as mayor was not without controversy. Bloomberg supported stop and frisk police tactics that a judge ruled unconstitutional, and jailhouse violence rose to levels so severe the federal government intervened. The administration’s homeless policies were ineffective. And he forced a change in the city charter to allow him to serve a third term.

Overall, record low crime and the lasting impact of innovative policies will cause his tenure to be remembered as a remarkable success. Having returned to his global media empire, and to his private philanthropy, Bloomberg continues to challenge the National Rifle Association on gun control, promote national education reform, and support policies to combat climate change. Bloomberg leaves behind a legacy of effective government, a legacy he might revive as he runs for president in 2020.

“McNickle, a lifelong New Yorker who has a doctorate in history and spent years working in finance, has done something valuable with this biography…He scrupulously allows both Bloomberg’s circle and his critics to have their say. But McNickle doesn’t leave the reader feeling helpless among conflicting evidence. He avoids the nihilist trap that causes so many journalistic assessments of politicians to be unsatisfying. He instead is willing to offer perspective about the scale of failures and successes.”
—David Leonhardt, TheNew York Times

“Chris McNickle’s Bloomberg is a must-read biography of one of America’s most influential politicians, philanthropists, and media moguls. Every page crackles with hard-earned facts and vivid prose. Highly recommended!”
—Douglas Brinkley is professor of history at Rice University, CNN presidential historian, and author of Rightful Heritage: Franklin D. Roosevelt and the Land of America
“No one would mistake Mike Bloomberg for a politician. He could be gruff and curt and had little patience for retail politics. Yet history will judge him among New York's greatest mayors.”
—Robert F. Kennedy, Jr., bestselling author and president of Waterkeeper Alliance

“Many politicians are heavily influenced by party, politics, money, power and position. Mike Bloomberg was unique because he was influenced solely by his ambition to do what he believed was right for the people of New York City. That was the key to his success.”
—Leon Panetta, former secretary of defense, former director of the CIA

“We’re getting used to the idea of billionaires in high office, but one man blazed the trail. Chris McNickle’s focus is not on Donald Trump but Michael Bloomberg, another New Yorker who re-made politics in the Big Apple. Bloomberg’s dozen years as mayor were arguably the most productive in the city’s modern history, and while often controversial, Bloomberg took a creative, energetic approach to public policy. Under different circumstances, Bloomberg might well have become president. McNickle’s lively and comprehensive book will make many regret that Bloomberg isn’t the wealthy New Yorker sitting in the Oval Office.”
—Larry J. Sabato, author of The Kennedy Half-Century: The Presidency, Assassination, and Lasting Legacy of John F. Kennedy and director of University of Virginia Center for Politics

“McNickle’s history of Michael R. Bloomberg is the gripping story about New York City, about innovation, and about a leadership style that transcends sectors, industries, and nations. Written with the same access and sensitivity of someone inside the room, McNickle’s is the first draft of twelve years in the life of one of the world’s great cities—and of the lifetime of an extraordinary leader who effectively governed an ungovernable city.”
—Janette Sadik-Khan, former commissioner of the New York City Department of Transportation

“Chris McNickle uses his considerable research and writing skills to paint a compelling portrait of a complicated man, one that spares no detail in telling his remarkable story. He gives the reader a birds-eye look into New York City politics and describes how Michael Bloomberg created a corporate and political culture focused on results rather than labels.”
—Dava Guerin, coauthor of Vets and Pets

“The challenge for New Yorkers voting for their next mayor on 9/11 was not only who had the best skills to turn the slowing economy around, but also, suddenly, who would keep them safe, and which candidate could best plan and rebuild the economic engine of Lower Manhattan after the terrorists had devastated it. No political strategist thought Michael Bloomberg could be elected mayor—and yet he won. In Bloomberg, Chris McNickle’s fast-paced story describes Bloomberg’s beginnings as a financial whiz-kid in Wall Street, why he ran, how he won, and how he steered the city through two financial crises, leaving New York’s treasury stronger than any mayor before him.”
—John Harte, author of How Churchill Saved Civilization

“A billionaire from New York decides to make his maiden foray into politics in one of the world’s highest-profile jobs. Sound familiar? But probably not who you’re thinking. In what was perhaps a precursor of a later foray into politics by another billionaire, Michael Bloomberg ran for, and was elected, mayor of post-9/11 New York City. In his fascinating book, Bloomberg, Chris McNickle breaks down the highs and lows of Bloomberg’s tenure as mayor and raises the question: Did he go a term too far?”
—Mike Farris author of A Death in the Islands: The Unwritten Law and the Last Trial of Clarence Darrow

“From the start of his mayoralty, Michael Bloomberg was tasked with helping New York City recover from the 9/11 terrorist attacks and move into the twenty-first century. McNickle’s Bloomberg is an intricate examination of a complex mayoralty that saw great strides and setbacks for New York and New Yorkers.”
—Evan Siegfried, author of GOP GPS

“This scrupulously researched biography shows just how Bloomberg, one of the first genius entrepreneurs of the information age, became New York’s richest citizen and then used his personal fortune in the service of the public good. McNickle’s careful examination of Bloomberg’s dynamic but controversial tenure as mayor of New York left me simultaneously furious and in awe of the man who took office in the dark days following 9/11. His policies, which unquestionably favored the wealthy and disadvantaged the poor and middle class, helped shape New York into the glittering global city that it remains today.”
—Alice Sparberg Alexiou, author of Jane Jacobs and The Flatiron

“For those wrestling with the idea of a businessman at the helm of American government, Bloomberg is a must-read. We owe a debt of thanks to Chris McNickle for reminding us—through his exhaustive research and thoughtful insights—of just how much can be achieved in public life by a committed, astute and passionate ‘outsider’ like Mike Bloomberg.”
—Kate Ascher, author of The Works: Anatomy of a City

“Entertaining and well researched, Bloomberg deftly details the early political ambitions and controversial three terms of this unlikely New York City mayor, whose time in City Hall is considered to be as transformative for the city as that of Fiorello La Guardia, John Lindsay, and Ed Koch.”
—Esther Crain, author of The Gilded Age in New York, 1870–1910

“After exploring ethnic politics and City Hall under David Dinkins, Chris McNickle tackles New York's most powerful, prosperous and enigmatic mayor, Mike Bloomberg. McNickle’s nuanced analysis perceptively compares New York's progress with other cities’ and reveals a singular figure who is politically courageous, lacks empathy skills, groomed no successor and presided over a city where people are living longer, but can no longer afford to live.”
—Sam Roberts, urban affairs correspondent for The New York Times and author of Grand Central: How a Train Station Transformed America

“What would an actual billionaire do with impressive political power? Told as a categorical evaluation, McNickle’s impressively taut biography of Michael Bloomberg evaluates the seismic shifts to life in post 9/11 New York City through the policies and beliefs of one of the most unconventional mayors in history. Bloomberg is tribute to a leader who unexpectedly rose to the mayor’s office and used his bold business acumen to govern in a style alternately pragmatic and idealistic.”
—Greg Young, cohost of The Bowery Boys podcast

How America's Most Successful Mayor Would Govern as President