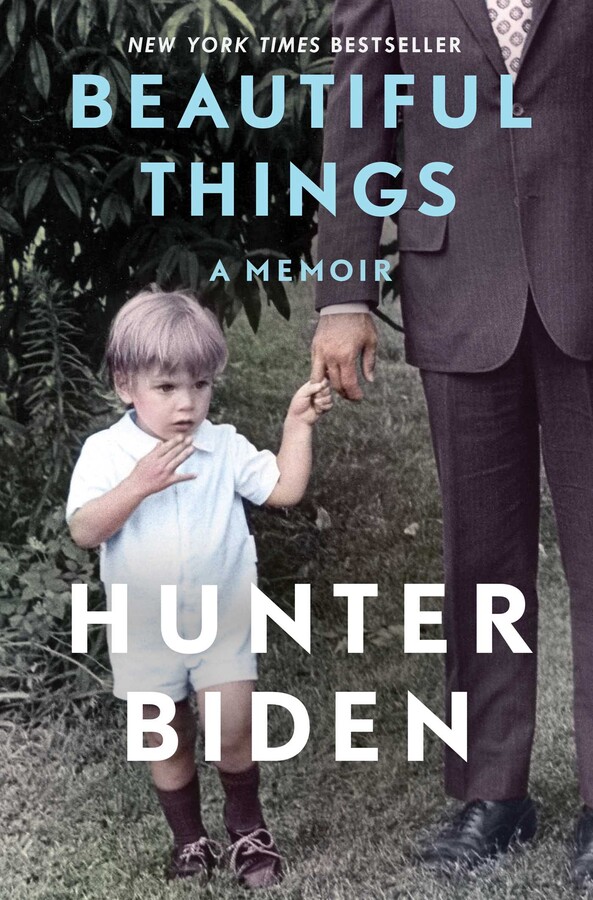 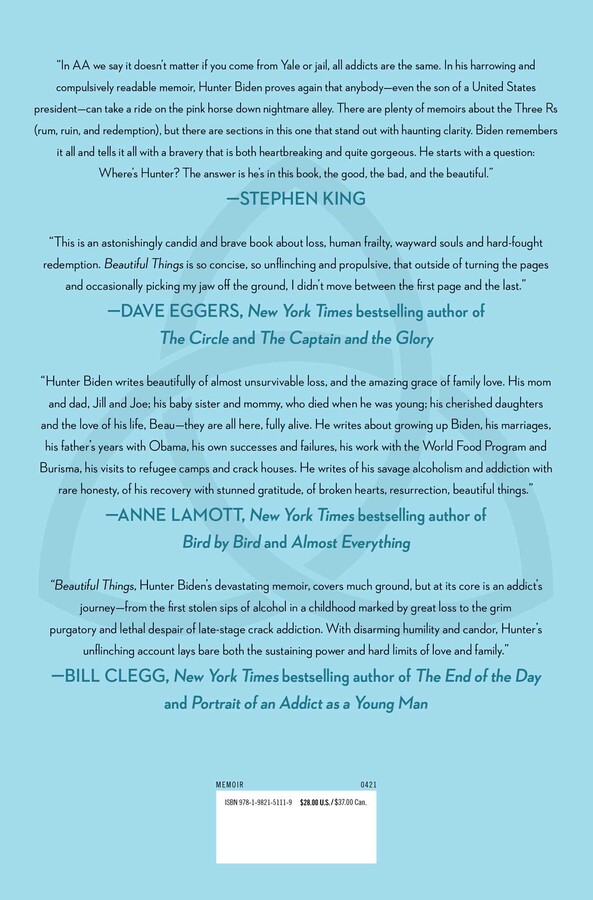 By Hunter Biden
LIST PRICE $28.00
PRICE MAY VARY BY RETAILER

“I come from a family forged by tragedies and bound by a remarkable, unbreakable love,” Hunter Biden writes in this deeply moving memoir of addiction, loss, and survival.

When he was two years old, Hunter Biden was badly injured in a car accident that killed his mother and baby sister. In 2015, he suffered the devastating loss of his beloved big brother, Beau, who died of brain cancer at the age of forty-six. These hardships were compounded by the collapse of his marriage and a years-long battle with drug and alcohol addiction.

In Beautiful Things, Hunter recounts his descent into substance abuse and his tortuous path to sobriety. The story ends with where Hunter is today—a sober married man with a new baby, finally able to appreciate the beautiful things in life. 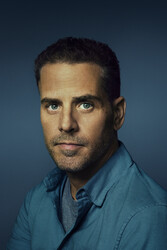 Hunter Biden is a lawyer and an artist. A graduate of Georgetown University and Yale Law School, Hunter has worked as an advocate on behalf of Jesuit universities, and served on numerous corporate and nonprofit boards, including as vice chairman of Amtrak and chairman of the board of World Food Program USA. The son of Joe and Jill Biden, Hunter is the father of three daughters: Naomi, Finnegan, and Maisy. He lives with his wife, Melissa Cohen Biden, and their son, Beau, in California.

“An unflinchingly honest look inside the First Family.”
—EW

“His journey is…deeply relatable for others living with addiction.”
—USA Today

"A gritty and shocking Biden family portrait that proves you never really know the burdens another person carries."
—People

“…a memoir at once harrowing, relentless and a determined exercise in trying to seize his own narrative from the clutches of the Republicans and the press.”
—The Washington Post

“I’ve never read a memoir like this before … it is extraordinary … you think you know his story … but this book, about addiction, about how many times Hunter Biden could have died, the President’s son, it’s breathtaking.”
—Brian Stelter, CNN's Reliable Sources

"...ineffably sad and beautifully written, tears the tabloid face off the story about an American family that has experienced the highest of highs and the lowest of lows."
—Maureen Dowd, The New York Times

"Grounded and gritty and self-realized, Beautiful Things ... is, at its core, as honest an account of addiction and grief as is possible to clearly see either of those two things ... The book operates on a Biden-esque strategy of underpromise, over-deliver ... it’s one we can all, in some way, see ourselves or our families or our hearts in at the same time."
—Vanity Fair

“I did not have high expectations for Beautiful Things …. I was wrong. Tears were flowing even before page 10. No one who has spent the better part of the last six years burning out the neural circuits of his brain with crack and drowning his grief over his brother’s death with booze has a right to be this vivid and effective a writer. I was stunned into submission … After a few pages I was wondering if I was reading the late Rolling Stone scribe Hunter S. Thompson, who turned his drug-induced adventures into stories, and not Hunter Biden … Beautiful Things is a heart-rending, but surprisingly tender account of one man’s remarkable journey to redemption and self-acceptance.”
—Tony Norman, Pittsburgh Post-Gazette

"In an era of indulgent political memoirs that seek to promote a candidate’s platform and cast the family as picture-perfect, Beautiful Things stands out for its raw truths ... Hunter Biden has published a book worthy of that MFA he skipped to pay the bills. Maybe America has a first son’s story of addiction to help it finally confront this deep problem that has haunted so many families across the nation."
—Time.com

"Hunter Biden has experienced some harrowing shit. But his willingness to look back on his ugliest moments without blinking is a genuine achievement. In the past 4 years, we’ve seen plenty of political memoirs with lurid details and wild accusations from those close to the Oval Office. But few have been so honest about their most humiliating moments and open about the hard, slow work of healing and reconciliation."
—GQ

“In AA we say it doesn’t matter if you come from Yale or jail, all addicts are the same. In his harrowing and compulsively readable memoir, Hunter Biden proves again that anybody—even the son of a United States president—can take a ride on the pink horse down nightmare alley. There are plenty of memoirs about the Three Rs (rum, ruin, and redemption), but there are sections in this one that stand out with haunting clarity. Biden remembers it all and tells it all with a bravery that is both heartbreaking and quite gorgeous. He starts with a question: Where’s Hunter? The answer is he’s in this book, the good, the bad, and the beautiful.”
—Stephen King

“This is an astonishingly candid and brave book about loss, human frailty, wayward souls and hard-fought redemption. Beautiful Things is so concise, so unflinching and propulsive, that outside of turning the pages and occasionally picking my jaw off the ground, I didn’t move between the first page and the last.”
—Dave Eggers, New York Times bestselling author of The Circle and The Captain and the Glory

“Hunter Biden writes beautifully of almost unsurvivable loss, and the amazing grace of family love. His mom and dad, Jill and Joe; his baby sister and mommy, who died when he was young; his cherished daughters and the love of his life, Beau—they are all here, fully alive. He writes about growing up Biden, his marriages, his father’s years with Obama, his own successes and failures, his work with the World Food Program and Burisma, his visits to refugee camps and crack houses. He writes of his savage alcoholism and addiction with rare honesty, of his recovery with stunned gratitude, of broken hearts, resurrection, beautiful things.”
—Anne Lamott, New York Times bestselling author of Bird by Bird and Almost Everything

“Beautiful Things, Hunter Biden’s devastating memoir, covers much ground, but at its core is an addict’s journey—from the first stolen sips of alcohol in a childhood marked by great loss, to the grim purgatory and lethal despair of late-stage crack addiction.  With disarming humility and candor, Hunter’s unflinching account lays bare both the sustaining power and hard limits of love and family.”
—Bill Clegg, New York Times bestselling author of The End of the Day and Portrait of an Addict as a Young Man

By Hunter Biden
LIST PRICE $28.00
PRICE MAY VARY BY RETAILER