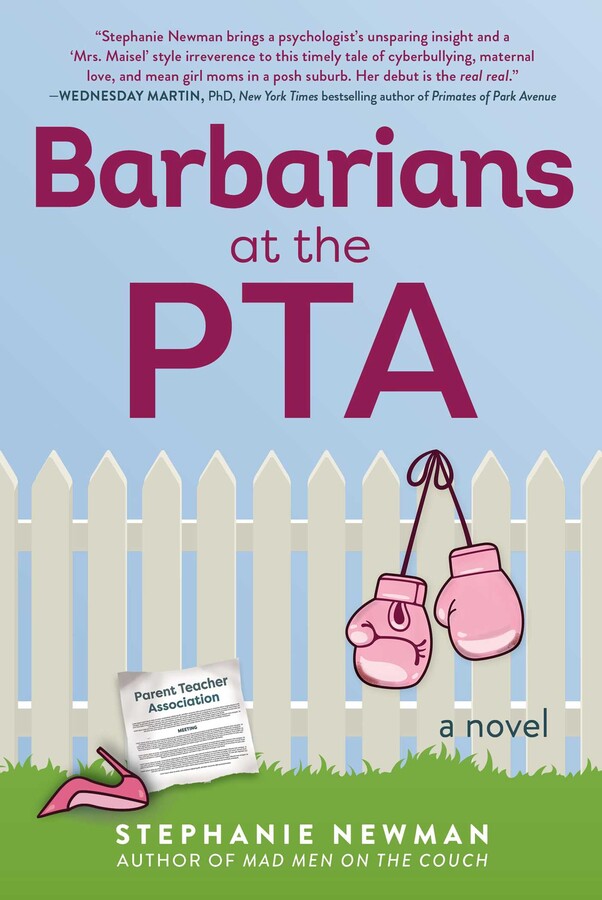 By Stephanie Newman
LIST PRICE $26.00
PRICE MAY VARY BY RETAILER

Desperate Housewives Meets Mean Girls in this Heartfelt and Hilarious Debut Novel about a Mother-Daughter Duo Facing Cliques, Cyberbullying, and Snobs in a Wealthy NYC Suburb

Victoria Bryant is starting over. After a rage-inducing scandal and the realization that her dreamy fiancé is faker than a faux Fendi purse, she moves her psychology practice and 10-year-old daughter, Rachel, to Mayfair Close, an idyllic Westchester, NY, suburb known for its manicured lawns and excellent schools.

The transition is initially seamless; several PTA moms befriend Victoria, her already busy practice booms, and Rachel finds a group of friends. But before anyone can say “helicopter mom,” in walks Lee DeVry. Wealthy, glamorous and perfectly toned, the PTA president is everything Victoria is not.

Vic tries to fit in with Lee and the other SUV driving, athleisure-wearing mothers. At first, she manages to balance the demands of her practice, single parenthood, and her budding romance with Jim, a handsome school administrator. All seems well until Rachel is suddenly targeted, first by the girls at school, and then by an anonymous cyberbully. As Rachel spirals, becoming isolated, playing hooky, and exhibiting signs of depression and disordered eating, Victoria vows to find out who has been messing with her daughter.

After she learns a secret that will help her rescue her child, Vic faces the ultimate dilemma: should she expose the bully publicly, despite the potential consequences to her professional reputation and relationships with Rachel and Jim?

A hilarious, sharp, and hope-filled debut, Barbarians at the PTA will have you cheering for badass moms everywhere who go to the ends of the earth for their children—and will leave you wanting more from Dr. Stephanie Newman.

I’ve always told my therapy patients that endings are inevitable; it’s best to understand feelings and move on without looking back. Having survived my share of losses and goodbyes, I knew that as soon as one door closed, another opened.

These were heavy thoughts for a Tuesday at 8 a.m. But Rachel was starting a new elementary school, and transitions were on my mind.

I headed down the hallway, wood floors creaking, causing my heart to do a little butterfly flip. It had only been a couple of weeks, and I still hadn’t adjusted to all the sounds and scents. Our new house was full of them--and who knew what else. Well, what did I expect; the place was built before women had the right to vote.

Rachel’s room looked like a disaster relief site, with cartons and cast-off clothing at every turn. She sat on the bed, staring into her laptop: a photo of several girls at a back-to-school picnic. I glanced at her leggings and t-shirt; they were identical to those in the picture. My little Margaret Mead, conducting field research on the first day of her new school.

We got into the car and made our way over, taking the shortcut.  It was muddy, littered with leaves and twigs. Driving to a nearby cul-de-sac and cutting through the back meant we didn’t have to deal with the scene in the parking lot. I’d heard it took forever to get out of there, and I had to get to work.

We were almost at the path to the entrance. Several girls who looked to be about Rachel’s age pushed past—why were fifth graders wearing make-up and pointy boots? And why was every car on the traffic line a gigantic SUV? My daughter was poker-faced, staring straight ahead and gripping her phone.  I felt a stab of guilt; she’d been through a lot already without having to switch schools.

Thinking about all of the recent changes brought me back to a dark time six months earlier. Once-buried details resurfaced: clear blue skies, the rectangular building at the edge of the floral district, a labyrinth of hallways leading to the Justice’s chambers. The three of us had stood, bodies knitted into a tight semi-circle. Now I closed my eyes, hoping to will the sadness and anger away. But it was too late; memories of that terrible scene at the altar flooded in.

Despite the presence of scores of friends and relatives, their folding chairs running the length of the room, it was my late Great Aunt Pearl’s voice I’d heard over and over, her well wishes uttered over the phone, from her bedside at the retirement community in Boca: “I hope you have the best day, my dear girl.” She was almost 94; too old to make the trip.

Aunt Pearl’s words and the image of doors closing had been etched in my brain, forming an unexpected pairing, sort of like Colin and me. I glanced across at him, thrilled by his smile.

Colin and I were getting married! My chest prickled with excitement at the thought that my daughter and I wouldn’t be alone anymore. Instinctively I reached over to squeeze her shoulder. At 10 years old, she was proud of her first salon blow out. Her brown hair and silky white dress were an identical match to my dark chignon and plain sheath. The basket of petals captivated Rachel; with every toss, each blood red flutter, her face split into a wide grin.

Colin grabbed my hand. His chocolate-colored eyes stared straight into my soul. He was smart, handsome, and successful, a partner at his law firm. A bookish psychologist and single mom, I could hardly believe I’d met someone who cared for me and was good to my daughter.

The Justice was speaking about blending—how Colin, Rachel, and I were now one—I bathed in the warmth of her words, part of a family for the first time since my parents’ fatal car accident my senior year of high school. I’d been mostly alone after that, until Rachel came along.

Glancing over the sea of dark suits and deep green, navy, and red dresses, I took it all in: the beautiful ceremony, my daughter and I surrounded by love. Everything had happened quickly: Colin and I meeting eighteen months ago, moving in together last spring as we finalized the details of the wedding. It was almost too good to be true. I fought off shivers of doubt--how well can you ever really know another person? If things didn’t work out, would Rachel be scarred? Would I? I glanced back at Colin’s parents, seated in the front row and radiating approval, Behind them were friends and colleagues, along with families from Rachel’s school; nods and smiles in every direction.

The Justice continued. “If there is anyone who knows of any reason why these two should not be joined in holy matrimony, let him or her speak now.”

There was no sound, except for a communal swish of air, heads turning until everyone was satisfied that there were no objections.

“Victoria,” the Justice was beaming in my direction. “Would you like to read the vows you have written?” I nodded and gripped Colin’s hand as I recited the words I’d composed and memorized: “You came into our lives after we’d been alone for so long. You made everything fun and helped me to believe in happy endings.” Rachel was giggling, pleased that the service we’d rehearsed over the past few days was finally happening; I cupped her under the chin and shifted back to Colin: “You treated my beautiful daughter as if she were your own child.”

There were sniffles and cooings from behind me. “I love you…” The room was still. And then there was an explosion of activity, an eruption of the electronic sort. Suddenly everyone was on their cell phones, grasping and hissing, metal chair legs pushed backward by the jerking of bodies and shifting of feet. It was the unexpected screeching of the furniture that caused me to turn towards the crowd.

Praise for Dr. Stephanie Newman's previous book, Mad Men on the Couch:
“Fans of the show will absolutely want to read these spot-on diagnoses of the major characters, but even casual or non-viewers of the show will greatly enjoy the ways in which Dr. Stephanie Newman has illuminated the trends and values of our current culture by looking at the way life once was a few decades ago. In sum, a smart, thoughtful and most of all, fun book.” ―Barry A. Farber, Ph.D., professor at Columbia University and author of Rock 'n roll Wisdom

“Dr. Newman takes this fascinating, compelling and award-winning TV show and skillfully analyzes both the psychological and broadly social messages implicit in it.” ―Irwin Hirsch PhD, professor and author of Coasting in the Countertransference

“This fascinating book presents us with a double gift. Not only does it offer a sophisticated and entertaining analysis of the characters in Mad Men, it also provides invaluable insights into the variety of personality types that we encounter off screen in our daily lives. A treasure for Mad Men fans and a delight to read, this book also serves as a splendid introduction to modern psychoanalysis.” ―Ted Jacobs, MD

By Stephanie Newman
LIST PRICE $26.00
PRICE MAY VARY BY RETAILER