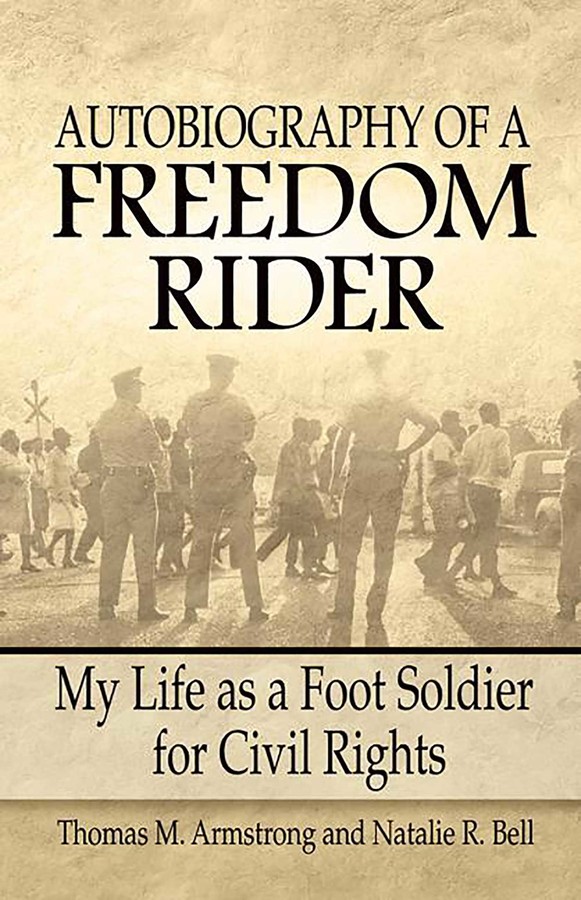 In the segregated Deep South when lynching and Klansmen and Jim Crow laws ruled, there stood a line of foot soldiers ready to sacrifice their lives for the right to vote, to enter rooms marked "White Only," and to live with simple dignity. They were called Freedom Riders and Thomas M. Armstrong was one of them. This is his story as well as a look ahead at the work still to be done.

June, 1961. Thomas M. Armstrong, determined to challenge segregated interstate bus travel in Mississippi, courageously walks into a Trailways bus station waiting room in Jackson.  He is promptly arrested for his part in a strategic plan to gain national attention.  The crime?  Daring to share breathing space marked "Whites Only."  Being of African-American descent in the Mississippi Deep South was literally a crime if you overstepped legal or even unspoken cultural bounds in 1961.  The consequences of defying entrenched societal codes could result in brutal beatings, displacement, even murder with no recourse for justice in a corrupt political machine, thick with the grease of racial bias.

The Freedom Rides were carefully orchestrated and included both black-and-white patriots devoted to the cause of de-segregation. Autobiography of a Freedom Rider details the strategies employed behind the scenes that resulted in a national spectacle of violence so stunning in Alabama and Mississippi that Robert Kennedy called in Federal marshals. Armstrong's burning need to create social change for his fellow black citizens provides the backdrop of this richly woven memoir that traces back to his great-grandparents as freed slaves, examines the history of the Civil Rights Movement, the devastating personal repercussions Armstrong endured for being a champion of those rights, the sweet taste of progressive advancement in the past 50 years, and a look ahead at the work still to be done.

Hundreds were arrested for their part in the Freedom Rides, Thomas M. Armstrong amongst them. But it is the authors' quest to give homage to "the true heroes of the civil rights movement . . . the everyday black Southerners who confronted the laws of segregation under which they lived . . . the tens of thousands of us who took a chance with our lives when we decided that no longer would we accept the legacy of exclusion that had robbed our ancestors of hope and faith in a just society."

Web Exclusive Autobiography of a Freedom Rider: My Life As a Foot Soldier for Civil Rights Thomas M. Armstrong and Natalie R. Bell. HCI, $14.95 trade paper (216p) ISBN 78-0-7573-1603-6 Published on the heels of the 50th anniversary of the Freedom Riders, Armstrong offers a stunning, sometimes emotionally wrenching first-person account of growing up on the frontlines of the Civil Rights struggle. While studying at the trade-oriented Prentiss Institute, Armstrong, a native of Lucas, Miss., became intensely involved in the movement that made massive tectonic shifts in civil rights for African-Americans. "Those dark and difficult days...are experiences that I no longer wish to relive. For more than 40 years, I refused to share those experiences with anyone," Armstrong reflects. Indeed, some of the horrifying situations he witnessed and endured may have driven him to alcoholism in the mid-1960s, but a 1987 DUI prompted him to teetotal from then on. The most interesting aspects of Armstrong's story are those detailing the forming of CORE (Congress of Racial Equality) and the SNCC (Student Nonviolent Coordinating Committee), along with his friendship with fellow Freedom Rider Joan Trumpauer Mulholland. Armstrong's narrative is also noteworthy because it pairs personal details with infamous events from that era, including his reaction to the Emmett Till murder and his disillusionment following the De La Beckwith case (the victim, Medgar Evers, was Armstrong's mentor). As told to journalist Natalie Bell, the writing is at times scattered and even sloppy but is nevertheless an important resource for Civil Rights researchers. (May)

Autobiography of a freedom rider; my life as a foot soldier for civil rights. Armstrong, Thomas M. and Natalie R. Bell. Health Communications, Inc., ©2011. 207 p. $14.95 978-0-7573-1603-6. Civil Rights Movement veteran Armstrong presents this memoir of his involvement in the Freedom Rides in the early 1960's and history of the Civil Rights Movement. Prior to the movement, the American South was a place of intense hate, segregation, and inequality. In 1961, a diverse group of young, socially conscious intellectuals boarded Greyhound buses and trains bound for the deep South. These individuals, known as Freedom Riders, sparked the beginning of the non-violent Civil Rights Movement. The price paid by these soldiers against inequality was not dissimilar to that paid by veterans of foreign wars; many were wounded, killed, or left with severe mental-health issues. This important memoir, intended for anyone with an interest in the Civil Rights Movement and race studies, provides both an individual and collective perspective on this vital period of social change in American history. (Annotation ©2011 Book News Inc. Portland, OR)

SOURCE: VOYA VOICE OF YOUTH ADVOCATESAUDIENCE: 7,000DATE: 08/10/2011HEADLINE: Book Review: Autobiography of a Freedom Rider: My Life as a Foot Soldier for Civil Rights Armstrong, Thomas M., and Natalie R. Bell. Autobiography of a Freedom Rider: My Life as a Foot Soldier for Civil Rights. Health Communications, 2011. 216p. $14.95 Trade pb. 978-0-7573-1603-6. In this memoir, Armstrong tells of his life as a black teen in the 1950s, when Jim Crow laws and the Ku Klux Klan were strong forces in Mississippi. He recalls a pivotal moment when he was denied service at a Dairy Queen window because of the color of his skin, which helped him decide to be a part of societal change. By 1961, Armstrong was a Freedom Rider, someone who refused to abide by the "Whites Only" signs and segregation on buses, someone who, despite being arrested and fearing for his life, refused to let the country carry on as if blacks were not worthy of the same rights as their white counterparts. This memoir is heavy on the names of Armstrong's friends and family, other activists, and politicians, which makes the beginning chapters somewhat difficult to wade through. While much of the information about segregation in the South is available in other books, Autobiography of a Freedom Fighter's strength is in the specific glimpses into and anecdotes about Armstrong's own life, like his family's home life and beliefs, his experiences helping blacks register to vote, and the post-traumatic stress he experienced because of the abuse he witnessed and faced. This book would be a nice compliment to They Called Themselves the K.K.K. by Susan Campbell Bartoletti (Houghton Mifflin, 2010/VOYA October 2010).--Deena Lipomi