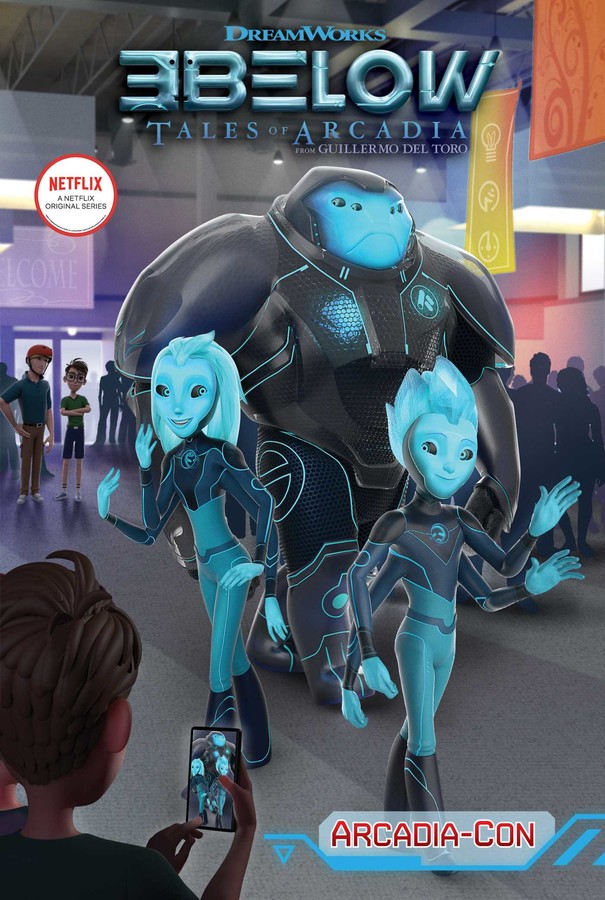 From the limitless imagination of acclaimed filmmaker Guillermo del Toro and DreamWorks Animation, get ready to meet a new cast of otherworldly characters in 3Below—the exciting, new Tales of Arcadia series, which picks up where Trollhunters left off.

For twins Aja and Krel being the new kids at school is hard. Honestly though, it’s high school. When isn’t there drama? But there may be a tad more drama than usual when you are teenage royals from another planet trying to blend in to the quiet little town of Arcadia Oaks, USA.

In this first adventure of the Tales of Arcadia: 3Below series, Aja and Krel grudgingly attend Arcadia’s annual sci-fi/pop culture convention (Arcadia Con) and discover it’s easy to hide in plain sight when everyone is wearing a costume! The aliens meet up with Eli, Steve, Toby, Jim, and Claire from the Trollhunters series, who come in handy when an alien bounty hunter arrives at the convention to collect the bounty on Aja and Krel. Suddenly, Arcadia Con isn’t just fun and games.

CHAPTER 1 INVADING YOUR HOMETOWN
“Great Galen!” roared Varvatos Vex. “Out of all the dark deeds Varvatos has carried out in his lifetime of brutal combat, this has to be the most core-crushing of all—clean-up duty!”

He hefted a refrigerator over his shoulder and carried it out of the yard and back into the kitchen. Vex returned the fridge to its rightful place, then looked at the rest of his Earth home. Usually, it appeared like any other dwelling in Arcadia Oaks. Little did Vex’s foolish “who-man” neighbors suspected, an Akiridion mothership lay hidden beneath the façade of this midcentury modern.

But these were not usual circumstances. Vex’s four eyes scanned the living room, still finding it in total disarray from the night before. Chairs remained overturned, shattered plates littered the counters, and several sharp knives stuck out from the floor—all courtesy of a recent attack from the bounty hunter, Halcon. Although the wall clock had been smashed during their tussle, Vex still felt time ticking away. Each new day in hiding on this mud-ball planet seemed to bring even more enemies after Varvatos Vex and the young royals under his care. Looking out a cracked window, he saw how the single sun was starting to set.

“Where are Aja and Krel, anyway?” Vex asked. “They should’ve returned from their education barracks a horvath ago!”

“You can ask them yourself,” responded the mothership, her cool voice coming from the ceiling. “Our royals are walking up to the porch right now.”

The front door opened, and in skipped Aja and Krel Tarron. Each of the human-looking teens smiled at the small plastic card in their hands, ignoring the mess around them. Vex cocked a few eyebrows at them and said, “What kept you so long? The solar cycle is nearly at an end!”

She showed Vex the card in her hand, which featured a small photo of Aja and the words “Arcadia Oaks High.”

“?‘Eye-dees’?” Vex repeated. “What do these badges have to do with your visual receptors? Did a teacher see your true eyes through your disguises? I will bash that Uhl like a skelteg—”

“No, no, no!” Krel said. “It’s short for ‘identification.’ It means our cover is working.”

“We’re all passing as normal humans!” added Aja with a grin.

No sooner did Aja and Krel finish speaking than their transduction effects wore off. Their human bodies fizzled away in a wash of blue energy, revealing their actual, four-armed Akiridion selves. Each royal glowed from within, the energies from their life-cores radiating outward through their pale blue skin and white hair. Frustrated, Krel threw his hands into the air and said, “As long as we come back here every twelve hours. Ay-yi-yi . . .”

“Well, more arms mean more help,” said Vex. “Consider it the next step in your warrior training, Aja. These are for you.”

He thrust several brooms and trash cans into Aja’s and Krel’s numerous hands and pointed to the debris around the home. The siblings shared a disappointed look before loud barks filled the air. They looked down and saw their purple pet running between their feet.

“Luug!” Aja called over the barking. “How would you like to help us eliminate all traces of wreckage from our human household?”

Luug cocked his head, lifted his leg above an overstuffed garbage bag, and vaporized it with a squirt of laser pee. Krel leaned passed behind Aja and said, “That works!”

“What about the Blanks?” said Aja. “They are supposed to perform tasks like these.”

“The Blank units masquerading as your who-man parents are otherwise indisposed,” Vex said with an annoyed shake of his head. “They have been adding new data to their memory banks. What should be a simple task has turned into a simple disaster.”

He pointed across the living room, where Ricky and Lucy Blank sat on a couch in front of the TV. Rather than get up and greet Aja and Krel, the two “parents” merely turned their heads around 180 degrees and smiled over their backs.

Lucy smiled unnaturally and said, “Anyone ask you to the spring sock hop-op-op-op?”

Aja and Krel took a step back from the malfunctioning Lucy. She stood up, walked backward to the kitchen, and spun her head around the right way, returning to what passed as normal for her.

“How about I fix a snack for everyone?” Lucy asked pleasantly.

“You know what they say,” Ricky said. “An apple a day keeps the doctor away!”

Lucy opened her mouth as far as it could stretch and emitted a canned laugh track from an Earth sitcom. Vex covered his face with his hand, while Aja and Krel just stared at each other in confusion. Ricky then waved the royals over to the couch and said, “Say, kids, why don’t you give the house chores a break? Come watch the boob tube with your old man!”

Aja and Krel shrugged and dropped their brooms on the floor with the rest of the clutter. They and Luug climbed onto the sofa with Ricky, but their smiles soon faded. The screen flickered from one station to the next at lightning-fast speed. The only one who didn’t seem to mind was Ricky Blank, who kept grinning that rubbery grin of his.

“Uh, I don’t think this is how you are supposed to do this,” said Krel.

“Ordinarily, you would be correct, My Royal,” said Mother from overhead. “But this Blank unit is restoring his memory banks with terrestrial televised transmissions to replace what was lost during Halcon’s home invasion. I believe the locals call it ‘channel surfing.’?”

Aja cheerfully stood on the couch, held out her arms as if balancing on a surfboard, and said, “In that case, hang a tent, dudes!”

Lucy Blank suddenly burst through one of the few undamaged walls in the house, carrying a tray loaded with cookies and a pitcher full of some bright-red liquid. Aja and Krel coughed and waved away the dust, while Vex snapped his broom in fury and staggered away.

“We’ve never had that before in our lives,” replied Krel.

Ricky Blank hooked an arm around Lucy and said, “Say, honey, that sure looks swell!”

Ignoring the Blanks, Aja and Krel returned their attention to the TV. As a Food Magic 3000 infomercial ended, Krel said, “At least the station isn’t switching every second.”

A new advertisement then began, broadcasting an image of thousands of humans in strange outfits gathered within some large structure. Aja, Krel, and Luug leaned closer.

“The wait is over, sci-fi and fantasy fans!” said the commercial’s announcer. “The tenth annual Arcadia Oaks Comic-Con is invading your hometown—tomorrow!”

The ad cut between footage of costumed people, boxes of comic books and toys for sale, and attractive humans signing photographs of themselves. Aja’s and Krel’s eyes went wide.

“This one has it all, Arcadia: Cosplay! Panels! Celebrity autographs! Gaming competitions! And any attendees who camp out in front of the Arcadia Oaks Convention Center overnight just might get a chance to see an advance screening of the newest Gun Robot film!”

Aja and Krel then watched a clip of a giant robot dueling with five colorful flying saucers in outer space. Their television vibrated from all the loud explosions and dazzling computer-generated special effects. The two royals gaped at the snippet of the Gun Robot movie for several seconds—before bursting with laughter.

“Is this meant to be a joke?” asked Aja between giggles. “There’s no sound in space!”

“And those ludicrous star craft!” Krel chuckled. “As if any ship would have the subspace manifold on the outside of its hull! What a load of kleb!”

“I find nothing comical about this comic-con!” Aja said.

Krel laughed. “I agree! Who would possibly go to such a foolish gathering?”
Richard Ashley Hamilton