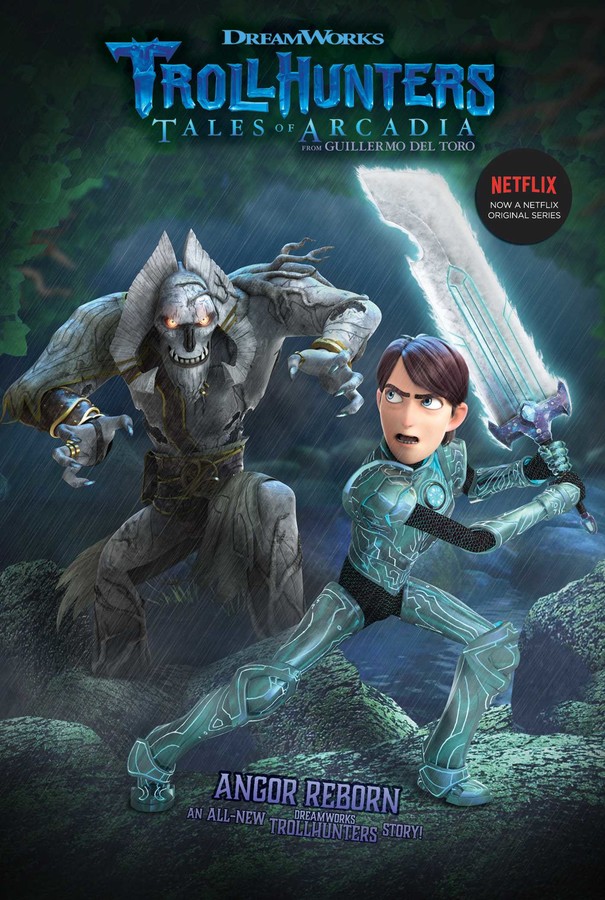 Jim faces off against Angor Rot in this all-new epic story based on the hit Netflix series Trollhunters—from the limitless imagination of acclaimed filmmaker Guillermo del Toro and DreamWorks Animation.

When presented with one more task from Merlin, Jim Lake, Jr., isn’t too worried. How bad could bathing in a magical elixir be? It almost sounds soothing. Hopefully he’ll be able to relax and get away from it all. Oddly enough, it does transport him, just not in the way he imagined. Suddenly Jim finds himself in the cold, dark woods and he’s not alone. The recently resurrected Angor Rot is there with a score to settle. To make matters more complicated, Jim has suddenly grown taller, stronger, and is sporting some very Troll-like hair, eyes, and teeth. All of this leaves him questioning Merlin’s magic, trying to get a handle on his new body, and wondering how he’ll get away from Angor Rot. Talk about an awkward stage!

Angor Reborn CHAPTER 1 BAPTISM BY LIAR
Jim Lake Jr. had the weirdest dream. In it, an old man trapped Jim in a little glass bottle. Jim pushed against the cork stopper with all his might, but his tiny arms and legs were useless, despite the Daylight Armor supporting them. The old man finally popped the cork, poured Jim into a giant Food Magic 3000, and pressed the frappé button. Jim thought he might have been screaming, but it was hard to tell over the whirring of the blender’s oversized blades.

When the Trollhunter woke up from his dream, it wasn’t a scream that escaped his lips—it was a flurry of bubbles. Jim’s eyes snapped open, and he immediately felt cold pressure around his entire body. The good news was he wasn’t trapped in a giant blender. But the bad news? Jim was trapped at the bottom of a giant body of water instead.

He yelped in alarm, releasing another shimmering wave of bubbles. The Trollhunter watched the last of his oxygen float to the surface, some fifty feet above. Feeling his emptied lungs burn, Jim tried to swim. But the Daylight Armor encasing his body only weighed him down. He disturbed the muck beneath his leaden boots, kicking up a cloud of silt.

Forcing himself not to panic, he reached for the Amulet on his chest and twisted it off. The metal breastplate to which it had been affixed vanished, as did the rest of the Daylight Armor. Now freed, and considerably lighter, Jim kicked his legs as hard as he could. He swam higher, even as his vision grew darker, and his head lighter. Jim felt the Amulet slip from his fingertips. He watched the device sink away, along with his hopes of survival.

The Trollhunter focused his last bit of willpower and reached out toward the Amulet. A bright blue glow appeared below and shot toward Jim like a rocket. He grabbed onto the Amulet as it passed, and the magic disc dragged him up and out of the water with a splash.

Now flying over the surface, Jim gasped for air. His daze lifted, and he thought he saw a pine forest backlit by the dusk—right before the Amulet reached the top of its arc. With another yelp, Jim started to fall. He crashed into the water again, only this part was much shallower. The Trollhunter trudged out of the lake and collapsed on its shore. Still catching his breath, he looked at the Amulet in his hand and said, “Would it have killed you to let me down gently?”

Ting! the Amulet chimed in response.

Jim shook the water from his ears. He looked at the canopy of silhouetted trees before recognizing the manmade dam at the opposite end of the lake.

I know this place! Jim thought. Lake Arcadia Oaks. Tobes and I used to go camping here back when we were Junior Mole Scouts.

A breeze blew through the pines, making Jim shiver. He wrapped his arms around his soaked body and lamented how this wasn’t the first watery grave he’d avoided this week. But such narrow escapes were all too common for Jim lately. Ever since Merlin’s Amulet transformed him into the first human Trollhunter, Jim’s world had flipped from ordinary to extraordinary—not necessarily in a good way. Nothing but madness, misery, and mayhem followed. And that was just at high school. Jim didn’t even want to think about all the near-beheadings, trials by combat, and exiles to infernal dimensions that came with his part-time job.

As he wrung out his sopping wet sweater, he tried to recall how he wound up at the bottom of a lake in the first place. The last thing the Trollhunter remembered was how Merlin prepared some potion in the Food Magic 3000 blender Jim’s mom got him for his last birthday.

Well, hopefully not my last birthday, Jim mentally corrected himself. Maybe I should just call it my most recent one. I’d like to live past my teens, if possible!

But the thought did little to cheer Jim. Because it then made him think of the whole reason behind Merlin’s elixir: the Eternal Night. Jim’s Troll friends, Blinky and AAARRRGGHH!!!, had gone over the bullet points of this prophesied end of the world: If Gunmar used Merlin’s Staff of Avalon to restore Morgana to life, the crazy witch would bring about an everlasting eclipse. With no sunlight to turn them to stone, the evil Gumm-Gumms would dominate the entire planet, above and below. And the good Trolls and humans—humans like Jim’s mom and best friends, Toby and Claire—well, they’d be hunted to extinction.

“If they’re even alive now,” Jim muttered, draining the water from his sneakers.

His memory gradually came back, and Jim felt a surge of worry for his loved ones. His mom, Barbara, had gone missing earlier that day, and Toby and Claire set out to search for her. But Jim still hadn’t heard back from them, and that was hours ago—before the sun went down and Merlin cornered his latest Trollhunter with the strange brew he’d concocted.

Jim reached for his phone to check for any texts or voicemails. But his pockets were empty. He slapped his forehead in frustration, and the jolt jogged the missing bits of his recollection. Jim had left his cell by the bathroom sink, after he’d filled the tub with water and poured in the elixir. After he’d donned the Daylight Armor and submerged himself in the bath. After Merlin had told him that, to stop the Eternal Night, Jim would have to become both Troll and Hunter. . . .

“Whatever that means,” Jim mumbled with another shiver.

He considered the darkening woods around him. Lake Arcadia Oaks was only a few miles outside town. Jim figured he could walk it. Especially since he couldn’t use his ride-sharing app without a phone. But if Jim hustled, he might even make it back in time to whip up breakfast for his mom and friends—because they had to be okay, they just had to—and call out Merlin for the liar he was. After all, that elixir was supposed to transform Jim into something bigger and better, not teleport him way out to the boonies.

Jim soon heard a whining that was not his own. This one came from between a few of the tall, black pines. He walked over and peered into the woods. Jim heard another whine and spotted its source just a few feet ahead.

A small wolf pup with floppy ears and a gray-and-white coat lay between two fallen logs. Some old fishing line was tangled around his paws like a plastic net. And the more the puppy struggled, the more it constricted around him.

He knelt and gradually extricated the young wolf from the web of carelessly discarded garbage. As soon as he was free, the pup ran away.

The pup stopped in his tracks and looked back. Jim stayed crouched and slowly offered out his hand. The wolf’s big ears piqued in curiosity as he crept back and gave Jim a few tentative sniffs.

“There you go,” said Jim in a sweet, singsong tone.

Feeling more at ease, the small wolf sat on his haunches and looked up at the Trollhunter. He started petting the pup, scratching behind his ear and saying, “I’d be worried that your mama is sizing me up for dinner right about now, but I’m guessing you’re all alone out here. Me too.”

The pup cocked his head at Jim and started barking, as if in answer.

Another gust blew through the woods, and the trees creaked around them. Jim looked up at the sky, and saw moonlight filtering between the growing storm clouds. He stood up and said, “Well, later, Sir Barks.”

Jim started heading to where he thought the main road was located. He’d only walked a few feet, when he heard another bark. Turning, Jim saw the pup behind him, tail wagging.

“Uh, you probably don’t wanna go where I’m headed,” Jim said. “I don’t know what their feeling is about dogs, but Trolls sure think cats are delicious.”

The Trollhunter resumed on his way, and Sir Barks followed. Jim tried to shoo him away, saying “Go on, skedaddle! Run free! Live la vida lupa!”

The wolf didn’t budge an inch.

“Seriously, Sir Barks, you’re better off keeping your distance,” Jim pleaded, pulling the Amulet from his pocket. “Ever since this thing found me, my life’s gotten pretty unpleasant—”

High above them, the thunderclouds parted, revealing a low, full moon—a Hunter’s Moon. Jim’s body suddenly seized with agony. It felt like his every nerve ending was on fire. He fell over, dropping the Amulet and startling Sir Barks. The wolf pup ran back to the trees. Jim was grateful, but not for the intense pain shooting through his muscles and bones that made his jaws clench, his eyes water.

Through his tears, Jim thought he saw something approach from the woods. It wasn’t Sir Barks. It was a large, lumbering figure that soon became two. Jim couldn’t tell if the double vision was due to his bleary eyes or if one body had been walking behind another. He fumbled for the Amulet, but his hands couldn’t coordinate, wouldn’t respond.

It was almost as if the Trollhunter’s body wasn’t his own anymore.