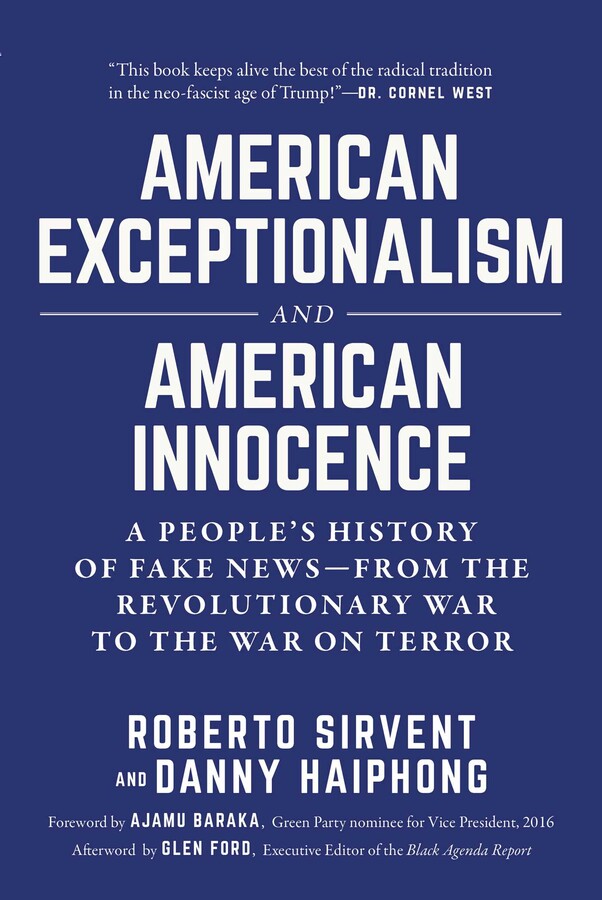 “Fake news existed long before Donald Trump…. What is ironic is that fake news has indeed been the only news disseminated by the rulers of U.S. empire.”—From American Exceptionalism and American Innocence

According to Robert Sirvent and Danny Haiphong, Americans have been exposed to fake news throughout our history—news that slavery is a thing of the past, that we don’t live on stolen land, that wars are fought to spread freedom and democracy, that a rising tide lifts all boats, that prisons keep us safe, and that the police serve and protect.

Thus, the only “news” ever reported by various channels of U.S. empire is the news of American exceptionalism and American innocence. And, as this book will hopefully show, it’s all fake.

Did the U.S. really “save the world” in World War II? Should black athletes stop protesting and show more gratitude for what America has done for them? Are wars fought to spread freedom and democracy? Or is this all fake news?

American Exceptionalism and American Innocence examines the stories we’re told that lead us to think that the U.S. is a force for good in the world, regardless of slavery, the genocide of indigenous people, and the more than a century’s worth of imperialist war that the U.S. has wrought on the planet.

Sirvent and Haiphong detail just what Captain America’s shield tells us about the pretensions of U.S. foreign policy, how Angelina Jolie and Bill Gates engage in humanitarian imperialism, and why the Broadway musical Hamilton is a monument to white supremacy.

“Danny Haiphong and Roberto Sirvent are two of the most courageous and truthful intellectuals in the belly of the U.S. imperial beast! In this powerful text they lay bare the hidden realities and concealed miseries of poor and working peoples even as revolutionary fire remains strong! This book keeps alive so much of the best of the radical tradition in the neo-fascist age of Trump!”
—Cornel West, Professor of the Practice of Public Philosophy at Harvard University

“James Baldwin reminds us that those who attempt to remain in a state of innocence long after that innocence is gone turn themselves into monsters. Roberto Sirvent and Danny Haiphong cut through the monstrous and seductive idolatry, bad faith, and false historic discourses of America's ‘exceptionalism’ and ‘innocence.’ America is precisely exceptional in its history of white terrorism, colonial logic, and imperialist fantasies and actions; and, America’s naked reality exudes a stench of culpability. The book that you hold is a radical counter-narrative to national and destructive common sense that is embedded within a politics of distraction. It is a text that radically forces a counter-memory, one that refuses to forget the violent myths of manifest destiny and a corrupt and toxic white philosophical anthropology that supports it.  Roberto Sirvent and Danny Haiphong dare to imagine a radically different future, one predicated upon uncompromising justice.”
—George Yancy, Professor of Philosophy at Emory University

“In a damning indictment of the collapse of the American Empire and its Democratic, Republican, and corporate media overseers, Roberto Sirvent and Danny Haiphong expose the ruling class propaganda machine as it worships at the altar of austerity, war, and white supremacy. This book argues that efforts to produce a kinder, gentler corporatist American state are misguided and demonstrates that a radical, even revolutionary alternative is our only hope.”
—Chris Hedges, Pulitzer Prize-winning journalist, author of America: The Farewell Tour

“This thoughtful, well-written, exceedingly intelligent and passionately argued book also happens to be one of the most powerful and analytical dissections of US imperialism and white supremacy published in years.”
—Gerald Horne, author of The Apocalypse of Settler Colonialism and The Counter-Revolution of 1776: Slave Resistance and the Origins of the United States of America

“American Exceptionalism and American Innocence is an immensely useful book for this moment. It is clearly written, full of compelling examples, and accessible. It will help readers who are angry and scared about Trump’s agenda connect their reactions to the broader arc of US stratification and violence, and the resistance movements we need to study, bolster, and expand right now. This book addresses the essential task of exposing how opposition to US imperialism must be central to all our struggles for justice for marginalized populations and against the extraction practices that are poisoning the land and waters.”
—Dean Spade, author of Normal Life: Administrative Violence, Critical Trans Politics, and the Limits of Law

“American Exceptionalism and American Innocence provides an astute, engaging, and provocative look into how the human toll of U.S. colonial occupation, imperial expansion, and structural racism is subsumed into an overarching narrative of the ‘greater good.’  By exposing the ideology of innocence that inevitably accompanies exceptionalism, Roberto Sirvent and Danny Haiphong move us beyond the constraints of liberal engagement to question our presumptions about what “America” means.  These short, topical essays expose the American exceptionalism we encounter in everyday life, thereby providing a roadmap for how it can be challenged.  A unique resource for students and teachers, grassroots activists, and anyone who wants to stop circling the same rock and have an actually interesting conversation.”
—Natsu Taylor Saito, author of Meeting the Enemy: American Exceptionalism and International Law

“The extreme danger of America to the rest of us remains the great unspoken, lost in myths, or what Larry David called ‘a babbling brook of bullshit.’ Witty terms such as ‘exceptionalism’ and ‘democracy’ are deployed as the bombs fall and the blood never dries. In this outstanding study, Danny Haiphong and Roberto Sirvent tell us why: and why Trump is merely a symptom and that only our urgent enlightenment can defy the inevitable.”
—John Pilger, Australian journalist and BAFTA award-winning documentary filmmaker

“Roberto Sirvent and Danny Haiphong deliver a stirring indictment of ruling class propaganda. By carefully exposing the destructive myths that sustain U.S. empire, this book provides an intellectual anchor that will surely disrupt and unsettle the powers that be.”
—Cynthia McKinney, Professor and Activist, former six-term member of the United States House of Representatives

“In this timely, multi-layered, brilliantly argued counter-history, Sirvent and Haiphong draw on case studies ranging from the nation’s settler colonial past to the Trumpist present so as to open spaces needed to imagine socially transformative alternatives to the white-supremacist, imperial policies that the discourse of American exceptionalism and the doctrine of American innocence have worked relentlessly to normalize.”
—Donald E. Pease, Avalon Foundation Professor of the Humanities at Dartmouth College and director of the Futures of American Studies Institute

“At once redolent of classic works by Howard Zinn and Frantz Fanon, as well as “Freakonomics” by Stephen J. Dubner and Steven Levitt, an offbeat take on behavioral economics, Sirvent and Haiphong expertly dissect the illogic of the illiberal American mind and the violence it has wrought, both at home and abroad. … If their book is indeed a dissection (or perhaps vivisection is more accurate), then Sirvent and Haiphong use multiple instruments to conduct their examination, invoking everything from Captain America’s shield to the Broadway play “Hamilton,” from 9/11 to the NFL draft, immigration to the invasion of Afghanistan. But they always seem to return to Ground Zero, which is racism, generally, and anti-black racism, specifically. … American Exceptionalism is a remarkable work of both scholarship and writing. In unfussy but searing language it identifies the cultural gene that distinguishes the white settler in the U.S. from kith and kin elsewhere in the New World.”
—Truthdig, reviewed by Jon Jeter, author of Flat Broke in the Free Market: How Globalization Fleeced Working People

“America's decline toward national madness has become so multi-faceted that narrow analysis can no longer explain it.  This wide-ranging book seeks to weave our history and our modern-day reality together.  It may seem radical, but it is not as radical as what our leaders are doing today to suppress human freedom at home and abroad.”
—Stephen Kinzer, former New York Times correspondent, author of Overthrow and All the Shah's Men: An American Coup and the Roots of Middle East Terror

“A varied offering of America’s real history, with sharp arguments and revealing information drawn down through the centuries—a rich treat for both beginners and the well-informed.”
—Michael Parenti, author of History as Mystery and Contrary Notions

“American Exceptionalism and American Innocence does what is so needed in this, the late stage of American Empire – it blasts a hole through the notion that the US is some unique beacon for democracy and freedom in the world, and that it is therefore privileged to intervene throughout the world at will.  Rather, as this book demonstrates, the US has never been such a beacon, either nationally or internationally. The US was built on genocide and slavery, and, accordingly, has invaded weaker countries to impose systems which protect the privileged few from the just demands of the struggling masses. The result has been vast inequality and suffering in both the US and abroad, and the undermining, if not wholesale destruction, of democracy.  As this book show us, US Empire is the greatest threat to the survival of humanity, and it is only the citizens of the US who can, and indeed must, dismantle it.”
—Dan Kovalik, author of The Plot to Scapegoat Russia and The Plot to Attack Iran


“Timely, historic, and analytically rich, Roberto Sirvent and Danny Haiphong rightfully challenge the hegemonic narrative of American innocence and American exceptionalism that pervade contemporary culture.  Examining monuments, memory, media, and movies, alongside of political slogans, sports culture and social movements, this book offers a powerful intervention, demanding that we account for the bipartisan project of hyper nationalism and narratives of America’s unique greatness. Providing historic lessons, tools of literary analysis, a critical gaze, and so much more, this book takes you on an important journey, preparing all readers for the current moment and a progressive future.”
—David J. Leonard, author of Playing While White: Privilege and Power on and Off the Field

“In their essays on race, empire and historical memory, Roberto Sirvent and Danny Haiphong skillfully unveil the profound hypocrisy and inherent barbarism of the US state, stripping away its respectable forms and forcing it to go naked. The book is a must read for anyone who wants to understand the US empire as it is, rather than as it would like to be understood.”
—Stephen Gowans, author of Washington's Long War on Syria and Patriots, Traitors and Empires: The Story of Korea's Fight for Freedom

&ldquo;Danny Haiphong and Roberto Sirvent are two of the most courageous and truthful intellectuals in the belly of the U.S. imperial beast! In this powerful text they lay bare the hidden realities and concealed miseries of poor and working peoples even as revolutionary fire remains strong! This book keeps alive so much of the best of radical tradition in the neo-fascist age of Trump!&rdquo;&#8212;Cornel West