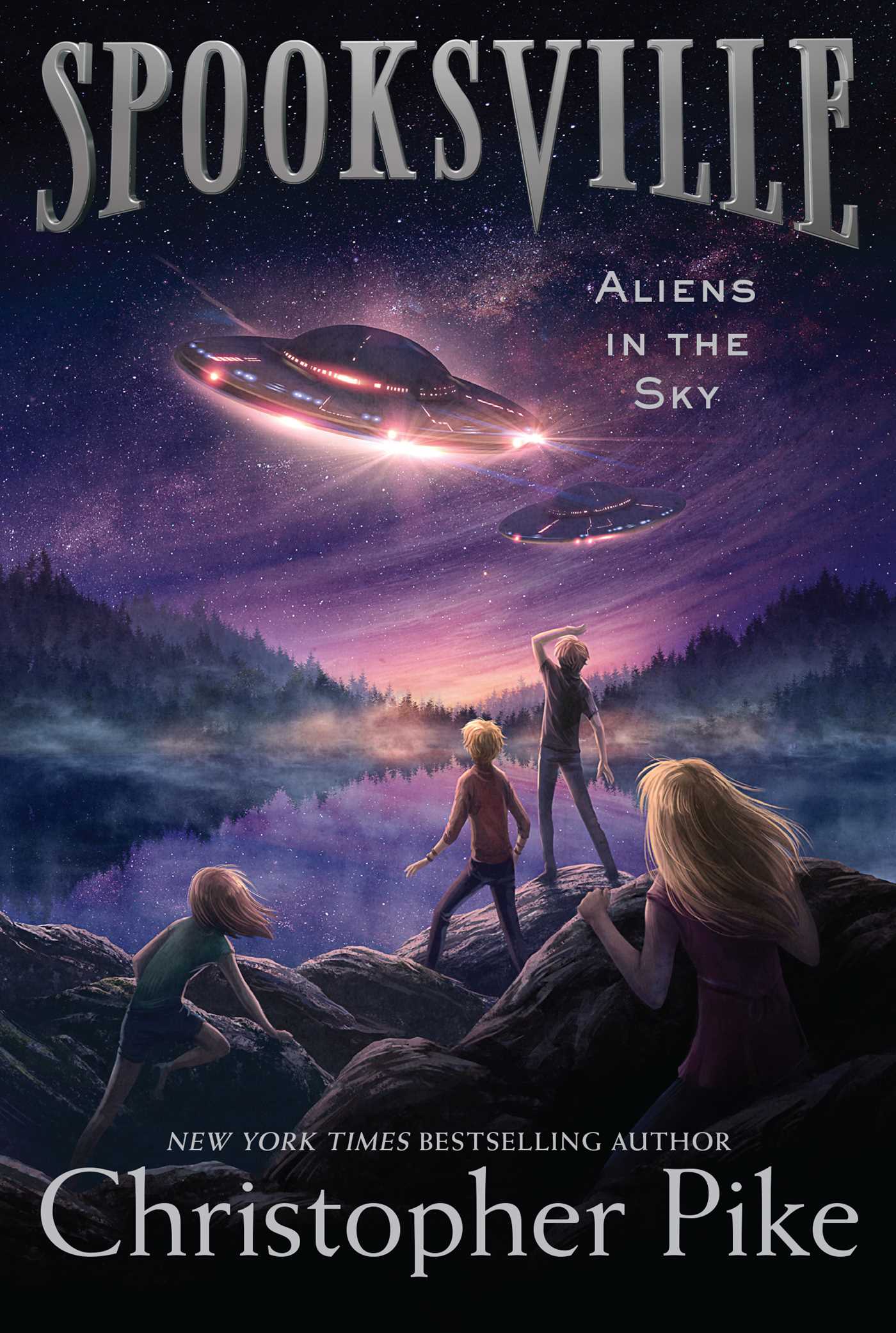 Book #4 of Spooksville
By Christopher Pike
LIST PRICE $17.99
PRICE MAY VARY BY RETAILER

When Adam and his friends stay up late one night, they see bright lights in the sky. Lights that look suspiciously like flying saucers. Then, the next night, one of the saucers lands by the reservoir, and the creatures who come out of the ship don’t look like people at all. Their heads are too large, and their eyes are too big and black. Worse, they want Adam and his friends to come with them for a little ride in space. In fact, the aliens insist that they come. They practically drag the kids into their ship. Then the flying saucer takes off! And it doesn’t look like they'll be coming back anytime soon. Can Adam and his friends figure out a way to get home?

Aliens in the Sky 1
Spooksville seldom got really hot. Nestled among the hills beside the ocean, Spooksville was usually cooled by a breeze preventing it from becoming uncomfortable, even in the middle of summer. But in the last half of July, only a couple of weeks after Adam Freeman and his friends got trapped in the Haunted Cave, the temperature rose sharply. At midday the thermometer burst past a hundred degrees. To get away from the heat, Sally Wilcox suggested they head up to the reservoir.

The four of them: Sally, Adam, Watch, and Cindy were seated on Cindy Makey’s porch, drinking sodas and wiping their sweat-soaked foreheads. Adam stared at the half-burnt-down lighthouse—less than a quarter of a mile away—where he had wrestled with a ghost earlier in the summer. He felt as if he were about to catch fire. He couldn’t remember it ever being so hot where he used to live in Kansas City, which was known for its hot summers. He wondered what had brought the heat.

“Why can’t we go in the water?” Cindy asked.

“There are no fish in the reservoir,” Watch added. “So there’s got to be something unhealthy about the water.”

“But Spooksville gets its water from the reservoir,” Adam said.

“That’s why so many children in this town are born mutated,” Sally said.

Cindy smiled. “You were born here, Sally. That explains a lot.”

“Not all mutations are bad,” Sally replied.

“The water is filtered before we drink it,” Watch said.

“I don’t know,” Watch said. “But it must be toxic stuff. The filtration plant has a habit of blowing up every couple of years.”

“Why’s it cooler at the reservoir?” Adam asked.

Sally spoke. “Because Madeline Templeton—the witch who founded this city two hundred years ago—tortured fifty innocent people to death up there. The horror of that event psychically reverberates to this day, making the whole area cold as ice.”

Cindy made a face. “And you want to go up there to cool off?”

Sally shrugged. “There is horror on almost every street in Spooksville, if you look deeply enough into the past. On this exact spot, where your house was built, Madeline Templeton once cut off a kid’s head and fastened it onto a goat.”

“Yeah, but the kid was supposed to look like a goat anyway,” Watch said.

“Yeah,” Sally agreed. “Maybe the witch did him a favor.”

“I don’t know if she tortured the people at the reservoir to death,” Watch continued. “I heard she just made them go swimming in the water, and their skin turned gray and their hair fell out.”

“I would rather die than lose my beautiful hair,” Sally said, brushing her brunette locks aside.

“I think the area is cooler because of all the subterranean streams,” Watch said, finally answering Adam’s question. “If you put your ear to the ground, you definitely hear gurgling water.”

Adam wiped away more sweat. “Well, should we go up there?”

Cindy was doubtful. “The Haunted Cave is up there.”

“The Haunted Cave can’t hurt you unless you’re stupid enough to go inside it,” Sally said.

“Thank you, Sally, for reminding me of my past mistake,” Cindy said.

“The Haunted Cave is high above the reservoir,” Watch said. “We can’t ride our bikes up that far, but we can take them as far as the reservoir. We could be there in less than twenty minutes.” He tugged at his T-shirt, trying to cool off. “I wouldn’t mind hanging out up there till it gets dark.”

“What do you think is causing this heat?” Adam asked.

“Could be an inversion layer,” Watch said.

“Or a curse from Ann Templeton,” Sally said. “Madeline Templeton’s seductive and evil descendant. She likes the heat. She likes all us kids to suffer in it.”

Adam shrugged. “I’m for going,” he said, glancing at Cindy, “if it’s all right with you.”

Sally leaned over and spoke in a loud whisper in Watch’s ear. “Notice how our dear Adam doesn’t make a move without checking with his sweet Cindy.”

“My mother doesn’t care what I do as long as I don’t die,” Sally muttered.

Adam stood. “Then it’s decided. We’ll ride up and stay until sunset.”

The others also stood. Sally, as usual, wanted to have the last word.

“Let’s leave before sunset,” she said. “You never know what the dark might bring.”
Christopher Pike

Book #4 of Spooksville
By Christopher Pike
LIST PRICE $17.99
PRICE MAY VARY BY RETAILER