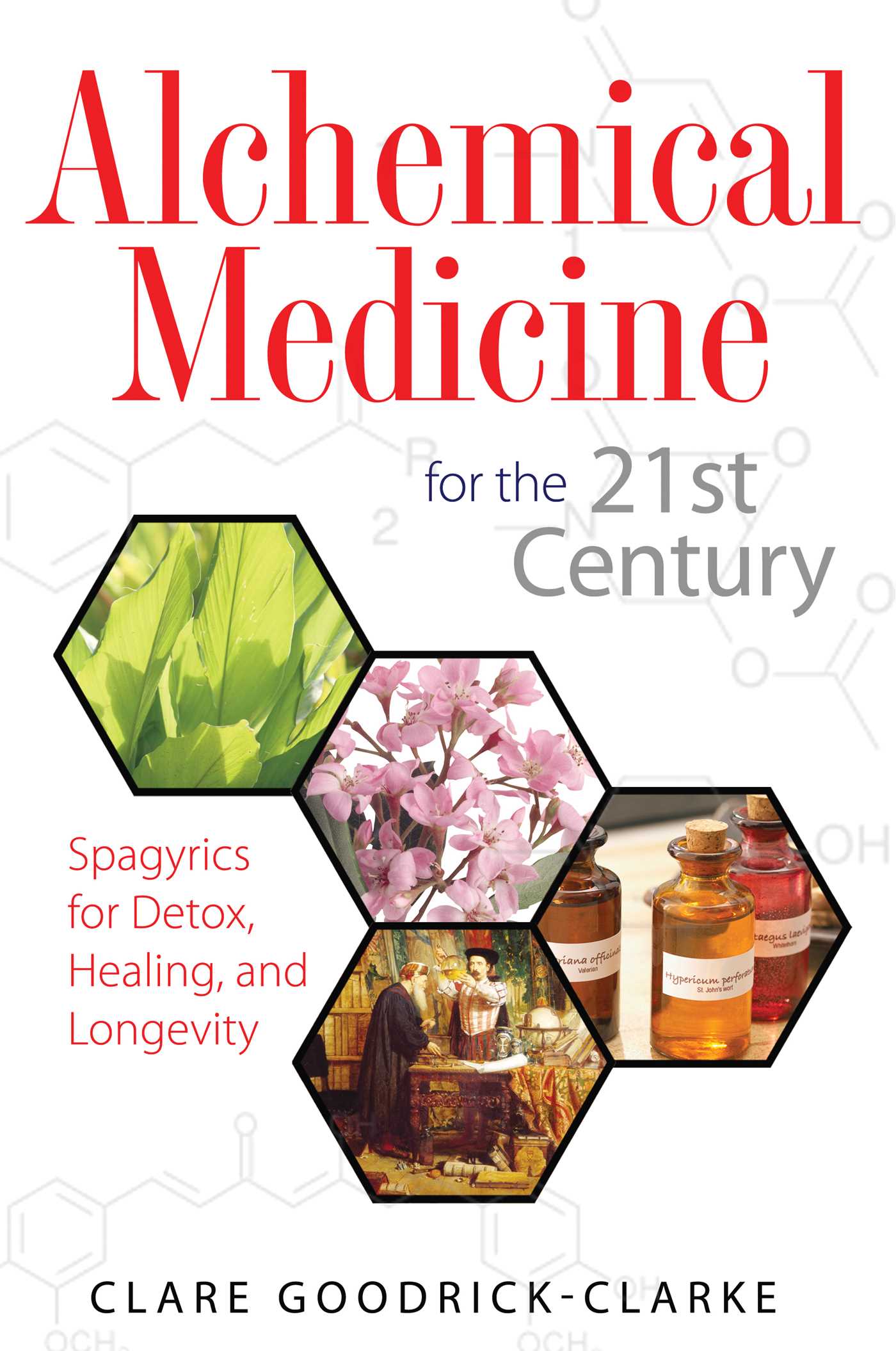 • Shows how the essences work holistically to heal the mind, body, and spirit with the energetic qualities of the plant

Spagyrics is a branch of medicinal alchemy that enhances the healing properties already existing in plants. Developed by Paracelsus, the magus and alchemist of the early 16th century, spagyrics is a holistic therapy that promotes healing at all levels of the human being--body, soul, and spirit.

Spagyric essences harness the dynamic life force in plants that triggers recovery from the energetic imbalance of illness. The harmonizing and balancing qualities of spagyric essences differ from other plant remedies and aromatherapy oils because they not only include the plant’s energetic information but also incorporate the salt of the plant, from which all toxic matter has been purged. The preparation of this alchemical medicine makes it possible to capture the full therapeutic spectrum of plants, including the cosmic energies they have absorbed.

Alchemical Medicine for the 21st Century contains detailed indications for using these alchemical preparations to treat both physical and mental disorders. The author shows, for example, that the tincture made from dandelion is especially potent on liver-related ailments and also raises the spirit and frees the patient from anger and bitterness. The immune system is also boosted by this essence, providing tonic effects for allergy sufferers. The author, a homeopath since 2000, also shows how these spagyric essences can be potentized homeopathically.

In describing how to make spagyric essences, I have tried to keep things very simple. There is already a great deal written about alchemy, and much of it leads away from the simplicity of the original intention, which is to maintain contact with the astral and vital healing powers of plants, to capture these powers, and through alchemy, even enhance them.

A well-made spagyric essence is a liquid of delightful fineness. Take time to make the essences well and you will be rewarded with tools of healing that will serve you well. Choosing an apposite time to make them according to the planetary disposition is ideal but even more important is to make them while you are in a positive and cheerful frame of mind. Manfred Junius used to say it was important to make spagyric essences with love, just as it is important to cook with love for the family and friends who will sit around your table. Use meditation and prayerfulness to clear the mind and free the heart of anxiety and resentment; these will contaminate. Let your shadow fall across them as little as possible, both literally and metaphorically. Far more can be achieved by working with conscious intention than by drifting along thinking of something else.

Alchemical work is a point of departure rather than an arrival. The study of both plants and alchemy is a fascinating pursuit that is never finished. The work is a continual process, both on the inner and the outer plane. It is for you to find your own way of working with the herbs and to draw upon the great gifts of nature that are freely given. Making even one spagyric essence for yourself brings with it a deepening awareness of yourself and the world around you.

Even if you live in a city, you may still own enough outdoor space in which to grow some herbs in a container. Choose plants to which you are drawn and pay attention to them, by which I mean more than simply providing enough water. By observing their growth from seeds or cuttings you can contact their healing forces. If you cannot grow your own herbs, make friends with plants whenever you are out in the countryside; take time to sit with them and find out what you can about how they grow and how they respond to light, dark, and the changes in seasons.

Other names: Thousand-leaf, Nosebleed, Milfoil. The plant is known in French as Mille fleuille; in German as Scharfgarbe; in Italian as Achillea.

The plant is evergreen and therefore available for most of the year. It dries well if hung up in small bunches where the air can circulate. It is a plant best harvested when flowering. Its fine leaves have a large surface area, and the plant can accumulate toxins from the atmosphere, such as car exhaust, so choose your harvesting area carefully.

Achillea millefolium is native to Europe but is widespread across all temperate zones. It is a perennial, aromatic herb that grows to about two feet in height. The bipinate leaves, between two and four inches long, are slightly hairy and divided into fine leaflets that grow in a graduated way, like a feather. They are broadest near the bottom of the stem. The white or pinkish white flowers surmount an erect furrowed stem up to two feet high and appear in late spring/early summer.

Nicholas Culpeper attributes the knowledge of this plant to Achilles, after whom it is named and was instructed in its use by Chiron the Centaur. Achilles used it as a wound dressing for the fallen heroes of the Trojan War; it is a valuable styptic, quickly reducing bleeding from open wounds and stopping hemorrhages. Thought to have a special affinity for healing wounds made with iron, it has been called the “Soldier’s woundwort,” herba militaris, and Knight’s milfoil, and has been used as a battlefield remedy for centuries. No special preparation is required; he leaves stripped from the stem can be packed in and around a fresh wound, where its antibacterial and antimicrobial action will set to work. It is also an effective painkiller.

In the Doctrine of Signatures its fine feathery leaves are shown to resemble blood vessels, branching out and becoming finer and finer, and indeed this is the sphere of its action. It will reduce hypertension by dilating the smaller blood vessels and the capillaries. This same dilating ability applies also to the skin. During a fever, yarrow will open the pores and encourage sweating. Fresh leaves rolled up and stuffed into the nostrils will abort a nosebleed, and this use for the plant has become one of its common folk names: nosebleed plant.

Achillea millefolium will resolve congealed blood, so it can be used for clots, bruises, and bleeding beneath the skin or fingernails. It has even been known to be effective in aneurism and stroke. Its ability to relieve stagnancy in the blood means that it is also an excellent remedy for women; it will regularize the periodic flow, correcting it when the flow is too heavy or scanty and reducing clotting. Its normalizing effects may help to correct infertility in women, and it has the additional advantage of ameliorating period pains. As a styptic, it is useful in metrorrhagia and menorrhagia.

So, a soldier’s remedy, a women’s remedy: yarrow has been called a “cure-all” for its anti-inflammatory, antiseptic, astringent, carminative, tonic, and anti-spasmodic qualities. In Old English, it was called gearwe, meaning simply “healer.”

Achillea millefolium can be combined with most other herbs, as it seems to intensify the medicinal action of other herbs.

Sensitive skin may be irritated. Avoid in pregnancy because it can cause contractions. Avoid when breastfeeding and with small children under five years old. Large doses can cause vertigo or headaches in people who are susceptible.
Clare Goodrick-Clarke

Clare Goodrick-Clarke is a homeopath and honorary fellow of the University of Exeter, where she lectures on the esoteric body and the history of alchemy. She studied with Manfred M. Junius, author of Spagyrics, and she is the author of Alchemical Medicine for the 21st Century and The Hermetic Art of Alchemy and coauthor (with Nicholas Goodrick-Clarke) of G.R.S. Mead and the Gnostic Quest. She lives in Devon, England.

“Alchemy is inadequately understood and appreciated today, but Clare Goodrick-Clarke’s Alchemical Medicine for the 21st Century provides a rare and special introduction to its principles, methodology, and basic practices. Alchemy is a modern and futuristic art and science that is worthy of the attention of serious students and practitioners of deep and real healing.”

“Clare Goodrick-Clarke’s Alchemical Medicine for the 21st Century is a much-needed overview and explication of the relation between medicine and alchemy. Clear and masterful, the book is a dynamic balance of theory and hands-on practice and will prove invaluable to anyone interested in healing, alchemy, and alternative medicine.”

– Brian Cotnoir, author of The Weiser Concise Guide to Alchemy

"I encourage interested readers to choose Alchemical Medicine for the 21st Century over others. It is one of the best on the market to give a concise informative compilation of facts and suggestions on how to use the healing properties of plants. This isn't new information, it's ancient wisdom that is finally surfacing in the 21st century."

“Alchemical Medicine for the 21st Century studies medicine from Hippocrates to Paracelsus to modern alternatives. It is a readable and informative book.”