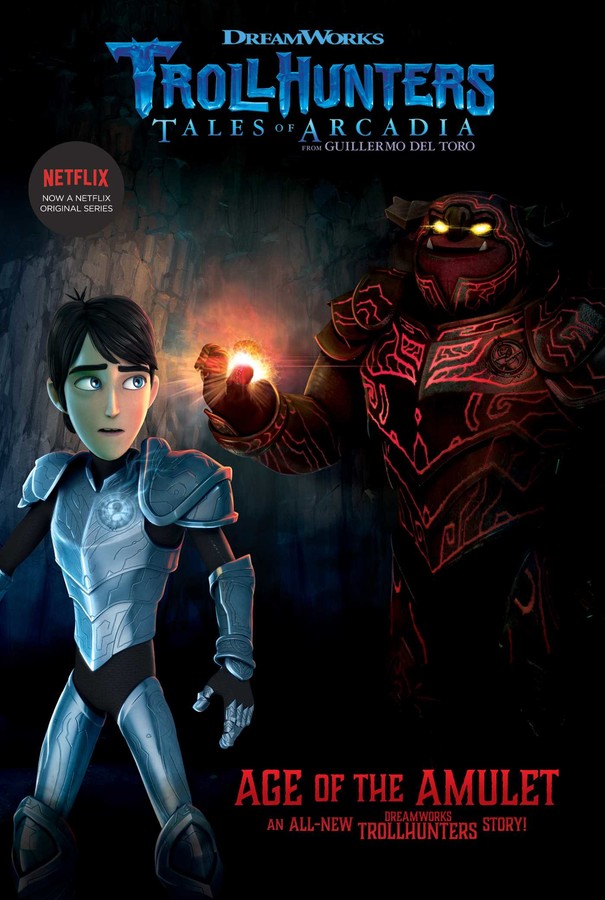 Age of the Amulet

Jim travels back in time to meet some of the very first Trollhunters in this all-new epic story based on the hit Netflix series Trollhunters—from the limitless imagination of acclaimed filmmaker Guillermo del Toro and DreamWorks Animation.

Jim travels back in time and encounters Gogun the Guardian, hailed as the bravest Trollhunter who ever lived. However, Jim is shocked to discover that Gogun is inept, unskilled, and terrified of everything and everyone. Jim knew when he was chosen as Trollhunter he would have to save mankind in the present, but he never realized he was responsible for the past as well. The fate of the world is a lot of responsibility for a fifteen-year-old—but luckily Jim is up to the task; as long as he’s home in time for dinner.

Age of the Amulet CHAPTER 1 KITCHEN CONFIDENTIAL
“Terrific,” groaned Jim Lake Jr. in his kitchen. “This is just what I need after the week—the month—the year I’ve had!”

“I’m sorry,” said Walter Strickler in mock chagrin. “Would you prefer we stop by later?”

Strickler and his companion, Ms. Nomura, shared a smirk and drank more tea. Jim yanked his mom’s teacups out of their hands before they could take another sip and said, “I’d prefer it if I never see your double-faces again!”

“So, I’m guessing a refill’s out of the question?” asked Nomura.

Jim rushed the cups over to the sink and began washing them. He really had to scrub at the stubborn smudge of Nomura’s violet lipstick as he said, “You sneaking into my house is out of the question! So please, for once in your incredibly long lives, do me a favor and get out.”

“I daresay your hospitality has lessened somewhat of late, Young Atlas,” Strickler said.

“Yeah, well, a visit to the Darklands will do that to you,” said Jim, drying the teacups and nodding at Nomura. “Just ask my old ‘cellmate’ over there.”

Strickler made a May I? motion before taking the teacups from Jim. As he returned them to the shelf, Strickler said, “After you spared my life and exiled me from Arcadia Oaks, I had quite a lot of time to reflect on the consequences of my actions. How . . . how is Barbara these days?”

“Fine, no thanks to you,” Jim said, his voice rising. “I just got done convincing her I’m not the Trollhunter. And that you’re just some creep who left town—not the Changeling who almost got her killed!”

Nomura whistled and said, “You weren’t kidding, Walter. This kid really does carry the weight of the world on his shoulders.”

“Jim, I understand that I wronged you,” Strickler resumed. “I was once your teacher and—I’d like to think—your friend. Clearly, I broke that trust, but I want to make it up to you. After all, who is more capable of change . . . than a Changeling?”

Walter Strickler instantly transformed from his human guise into his true form—that of a tall, reptilian Changeling. Reaching under his cloak, Strickler retrieved a green fistful of feather darts and flung them at Jim.

Tucking and rolling behind the kitchen island, Jim pulled the Amulet from his jeans and said in a single breath, “For-the-glory-of-Merlin-Daylight-is-mine-to-command!”

Strickler shielded his yellow eyes from the Amulet’s glare. When the incandescence faded, Jim Lake Jr. stood before him, encased in the Daylight Armor of the Trollhunter. The shape-shifter lowered his arm and said, “Your reflexes remain as keen as ever. But how do you fare against two enemies at once?”

Jim turned around just in time to see Nomura’s body morph into that of a lithe, purple Changeling. She snatched the meat cleaver and Santoku knife from the cutting board and hurled them at the Trollhunter. The Sword of Daylight manifested in Jim’s hand, and he used the flat of his blade to deflect the two knives. The Santoku lodged into the ceiling, but Strickler caught the cleaver and closed in on Jim. Nomura pulled two scythes from the scabbards on her back.

Looks like close-quarters combat, thought Jim as he magically replaced the Sword of Daylight with his Glaives—a pair of curved throwing weapons, one in each of Jim’s hands.

“This reminds me of the first time I was invited to dinner at your home,” Strickler joked.

The two Glaives sparked against Nomura’s and Strickler’s blades as Jim parried their every strike like a skilled swashbuckler. Sandwiched between two bloodthirsty shape-shifters, Jim’s mind raced. He knew his coordination would falter eventually and that Strickler and Nomura would carve him up like a Thanksgiving turkey. So rather than keep the Changelings away from him, the Trollhunter hooked his Glaives around their weapons and pulled them toward him. Strickler and Nomura slammed into each other and fell to the tiled floor in a heap. Kicking away the scythes and cleaver, Jim said, “Nobody beats me in the kitchen. Nobody.”

“Pop quiz?!” Jim bellowed. “You two just tried to filet me with my own knives!”

“Just imagine what Gunmar will do now that he’s out of the Darklands,” said Nomura.

“Do you think he’ll hesitate to send every Gumm-Gumm at his disposal after you? Just because of the week—the month—the year you’ve had?” Strickler added sharply.

Strickler and Nomura looked at each other, cocking their eyebrows in surprise.

“Why would I ever expect my enemies to come after me one at a time? I’ve never been that lucky,” Jim added, then looked at the Amulet on his chest. “Not since this thing found me.”

He picked up the discarded meat cleaver and muttered, “All I wanted to do tonight was relax at home, cook a nice dinner for my mom, and maybe even get my homework done for a change. For once—just once—I wish this Amulet would let me do what I wanted.”

“And so it can, Young Atlas,” said Strickler, reverting to his human visage. “I can show you how . . . if you accept me as your teacher again.”

A genuine smile spread across Strickler’s face, prompting Jim to actually consider the offer . . . until a set of headlights danced across the kitchen walls. Hearing a car pull into the driveway, Jim cried, “Oh no—my mom’s home!”

“Barbara?” Strickler whispered to himself.

“Go! Through the back door!” Jim ordered.

Nomura collected her scythes and stopped in front of Jim to say, “You have a lovely home. Sorry I didn’t mention it the last time I was here, trying to kill you.”

With that, Nomura adopted her human disguise and slinked into the twilit backyard. Strickler reluctantly followed, but hesitated at the threshold to address Jim one last time.

“I know I have hurt you. Your friends. Your family,” Strickler said in quiet apology. “But at least consider what I said, Jim.”

Before Jim could respond, Walter Strickler slipped outside. No sooner did the back door close than the front one opened. Barbara Lake stepped into the entryway and called, “Jim, I’m home. My shift ended early. Isn’t that great?”

In the kitchen, Jim wiped the sweat from his forehead with the back of his arm, only to be reminded that he was still holding the meat cleaver. And still wearing his armor.

As Jim raced toward the knife block, Barbara threw her white doctor’s coat on the sofa. She crossed over to the dining room, missing the tail end of a mystical light show before she reached the kitchen and found her son. Jim stood ramrod straight in his normal clothes, a strained smile on his face and the Amulet tucked into his back pocket.

“How was your day?” Barbara asked.

“Uneventful is good,” Barbara said. “But what was that blue light I just saw?”

Barbara shrugged, removed her eyeglasses, and cleaned them with the fabric of her hospital scrubs. Jim looked to the heavens and allowed himself a small sigh of relief. That’s when he noticed the Santoku still wedged in the ceiling, directly over his mom’s head. With mounting dread, Jim saw the knife start to slip lower and lower, until it finally came loose and fell—right toward Barbara. She had barely put on her glasses before Jim yanked her forward.

Jim pulled his mom into a hug with one arm and, with his free hand, he caught the knife by its handle behind them. Barbara’s surprise gave way to happiness. She hugged her son in return and said, “And here I was worrying that you were getting too old for these.”

“Never, Mom,” Jim replied from the bottom of his heart.

Barbara squeezed her son a little tighter before she let him go. Jim subtly returned the Santoku to the knife block without his mom seeing and said, “Now, what would you say to a nice, home-cooked meal of grilled polenta cakes served under a hearty mushroom ragout and accompanied by a side of sautéed kale with crispy garlic and chilies?”

“I would say that sounds delish—” Barbara began before a buzz interrupted her.

“This is Gun Robot. You have a text message,” announced Jim’s ringtone.

JIMBO! COME QUICK!! YOU KNOW WHERE!!!

“What’s that, honey?” Barbara asked, not quite hearing that last part.

Recovering, Jim said, “Toby’s, um, just reminded me that I promised to help with our Español homework tonight. But I can probably just blow him off . . .”

Jim’s cell phone buzzed with another text from Toby:

“Or not,” Jim added, scrolling through the thousands of exclamation points Toby typed.

“Go help your friend,” Barbara said. “Besides, I’m sure the last thing a teenager wants to do is spend the night at home with his mother.”

But before Jim could finish the thought, Barbara kissed him on the cheek and rummaged through the refrigerator for leftovers. Jim’s cell buzzed with yet another Toby text:

Jim immediately recognized that acronym. It was a secret code he and Toby used only in case of extreme emergencies. They came up with it after the time Jim wore a Grit-Shaka—a Troll relic that turned him into a carefree, albeit unbearably overconfident, jerk.

“Why me?” Jim Lake Jr. asked of no one in particular.

Age of the Amulet