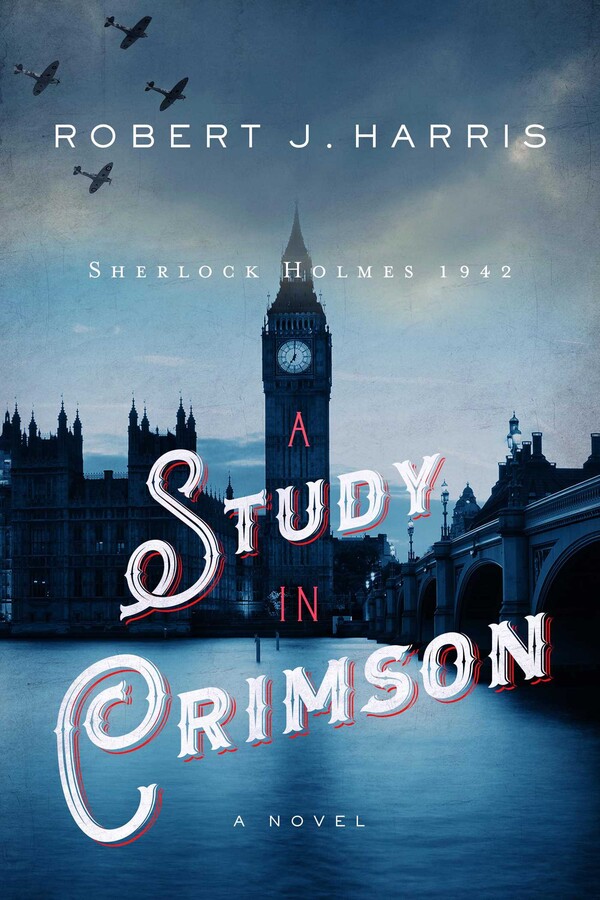 A Study in Crimson

Bringing Sherlock Holmes from the Victorian Era into the dark days of World War II, this imaginative new thriller confronts the world’s greatest detective with a killer emulating the murders of Jack the Ripper.

A killer going by the name of “Crimson Jack” is stalking the wartime streets of London, murdering women on the exact dates of the infamous Jack the Ripper killings of 1888. Has the Ripper somehow returned from the grave? Is the self-styled Crimson Jack a descendant of the original Jack—or merely a madman obsessed with those notorious killings?

In desperation Scotland Yard turn to Sherlock Holmes, the world's greatest detective. Surely he is the one man who can sift fact from legend to track down Crimson Jack before he completes his tally of death. As Holmes and the faithful Watson tread the blacked out streets of London, death waits just around the corner.

Inspired by the classic film series from Universal Pictures starring Basil Rathbone and Nigel Bruce, which took Sherlock Holmes to the 1940s, this is a brand-new adventure from a talented author who brilliantly evokes one of mystery fiction’s most popular characters.

Robert J. Harris was born in Scotland and studied at the University of St Andrews where he graduated with first class honors. He is the designer of the bestselling fantasy board game Talisman. His first novel, The Thirty-One Kings—inspired by the classic John Buchan thriller The Thirty-One Steps—was acclaimed by critics and readers alike. Robert lives in St Andrews, Scotland.

Praise for A Study in Crimson:

"A Study in Crimson is an engaging read. The game, as Harris says in his preface, “is once more afoot”—and in fine fashion."

"Besides providing the duo with a worthy challenge, Harris makes his Watson an intelligent and competent sidekick. Both the strong characterization and plot bode well for a sequel."

"Harris successfully captures Holmes’ brilliance, talent, and arrogance, as well as Watson’s dogged devotion to Holmes and the atmosphere in London during the dark days of war. The case he has imagined for Holmes to solve is both thoroughly challenging and pleasingly multilayered. A satisfying, albeit gruesome, read."

"A Study in Crimson does right by its venerated source material while putting a new spin on Conan Doyle's characters by rejiggering their historical context. Harris's mystery is up to snuff...he does yeoman's work with Watson's narration, capturing the good doctor's starry-eyed bemusement with the fustily fastidious detective."

"Harris’ take on the iconic characters is outstanding."

“Riveting. Daring measures and hairbreadth escapes are the rule in this first-person chronicle. The can-do spirit of Mr. Harris’s book evokes a time when it seemed the fate of the world might hinge on the acts of a handful of brave souls. The Thirty-One Kings is old-fashioned in many ways?which is what makes it such a reassuring pleasure to read.”

“A little bit of James Bond, a smattering of Indiana Jones, and perhaps even a bit of Buckaroo Bonzai? Clever, well-plotted, and big fun.”

“The plot whips along, embellished by dogfights, perilous car journeys, personal vendettas, and plenty of derring-do?plus a whiff of enjoyable parody to lend an edge. I was beguiled.”

“Harris does a fine job integrating characters from Buchan’s works, imagining the way they might have aged and grown. The plotline is as one would imagine the next Hannay story might have been, had Buchan written it. Harris knows his history, and he knows his Buchan. This is a fine, fast, exciting read. Recommended.”

“A loving tribute to Buchan and thoroughly good fun."

A Study in Crimson