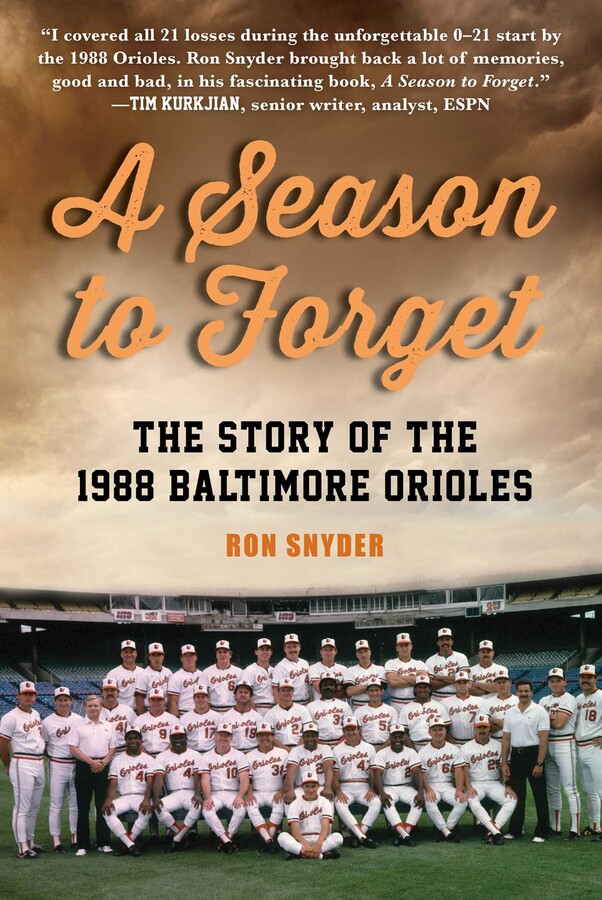 A Season to Forget

The Story of the 1988 Baltimore Orioles

By Ronald Snyder
LIST PRICE $24.99
PRICE MAY VARY BY RETAILER

Like Jimmy Breslin’s classic Can’t Anyone Here Play This Game? on the 1962 Mets, author Ron Snyder discusses how the Baltimore Orioles became infamous for having the worst start of any team in Major League Baseball history.

“I covered all 21 losses during the unforgettable 0–21 start by the 1988 Orioles. Ron Snyder brought back a lot of memories, good and bad, in his fascinating book, A Season to Forget. I still can’t believe that season happened.”—Tim Kurkjian, senior writer, analyst, ESPN

Between 1966 and 1983, the Baltimore Orioles were considered the best team in baseball. During that span, the team won three World Series, advanced to three others, and competed for a playoff spot just about every season.

The Orioles were a model franchise thanks to its “Orioles Way” approach to building a franchise through a strong farm system. Future Hall of Famers like Brooks Robinson, Jim Palmer, Cal Ripken Jr., and Eddie Murray made their ways through the ranks and helped put consistent winners on the field.

But five years after Ripken caught the final out to clinch the Orioles World Series victory over the Philadelphia Phillies, the franchise was in disarray. From not understanding how to utilize free agency to having their once famed farm system dry up of talent, the once-proud franchise was spiraling downward.

Heading into the 1988 season, the Orioles expected to struggle after a 95-loss season the year before. Not even the return of famed manager Earl Weaver in 1985 and 1986 was enough to turn the team around. The Orioles attempted to revamp their roster in 1988 with 14 new players on the roster compared to the year before.

The team opened that season 0–21, shattering the record for futility to start a season by eight games. They consistently found different ways to lose each night to the point that President Ronald Regan sent a message of support to the lovable losers from Charm City. Religious leaders and mental health professionals even offered to help the team find that elusive first win.

A Season to Forget takes an in-depth look at the lead up to that season, a game-by-game breakdown of the streak, and the toll it took on those who lived through it.

Ronald Snyder is an award-winning journalist with more than fifteen years of experience. He has covered everything from the 9/11 attacks to the NFL playoffs to multiple elections in his career. The author of Wrestling’s New Golden Age, Ronald is based in Baltimore, Maryland, where he lives with his wife, son, and twin daughters.

“I covered all 21 losses during the unforgettable 0–21 start by the 1988 Orioles. Ron Snyder brought back a lot of memories, good and bad, in his fascinating book, A Season to Forget. I still can’t believe that season happened.”
—Tim Kurkjian, senior writer, analyst, ESPN

“Hard to believe that a team with Eddie Murray, Cal Ripken, and Fred Lynn could lose 21 straight games. When you consider it was the first 21 games of the season, that’s downright crazy! I was there the night the madness and the futile streak ended in Chicago and then the amazing night the 1–23 losers came home to a sellout love-fest at Memorial Stadium. Ron Snyder has brought this unthinkable story back to life with an inside look at the Orioles train-wreck of ’88. A Season to Forget is fascinating to remember.”
—Scott Garceau, Baltimore TV-Radio sportscaster

“Snyder does a comprehensive job providing the inside story of a dark era in Orioles baseball, from well before the 1988 season to long after it mercifully ended.”
—Dave Ginsburg, Associated Press

“It’s easy to dismiss the Baltimore Orioles’ 1988 season as a forgettable footnote in baseball history. No one wants to remember the record breaking 0–21 start that captured the nation’s imagination, or the 106 losses the O's endured, many in heart-wrenching fashion that tested fans’ mettle. But they’re there, they happened, and you can’t just erase them for the sake of convenience. History teaches us that perspective is critical to understanding what’s happening—and what might happen in the future—and the 1988 season was anything but unremarkable. In A Season to Forget: The Story of the 1988 Baltimore Orioles, Ron Snyder provides that perspective, using the games and personalities to help weave an explanatory framework that reveals why the campaign was important—to the team, the players, the fans, and the city. It’s a fun read for both the casual fan who may not have been around to be part of it, and for the rabid Orioles rooter who knows how 1988 set the stage for a most remarkable turnaround the next season.”
—Pete Kerzel, MASNsports.com

“Fans of the Orioles, especially those of a certain age, will enjoy revisiting the Orioles of the ’80s, the team that won the 1983 World Series. Then came the subsequent deconstruction of the championship team, including management and coaching changes and ill-timed free-agent trades that compromised the team’s legendary foundational team-building approach known as ‘The Orioles Way.’ Tracking those changes in detail, Snyder’s account of the rise of free-agency and how it affected the team’s traditional management style is especially engaging.”
—Susan C. Ingram, Jewish Times

A Season to Forget

The Story of the 1988 Baltimore Orioles

By Ronald Snyder
LIST PRICE $24.99
PRICE MAY VARY BY RETAILER