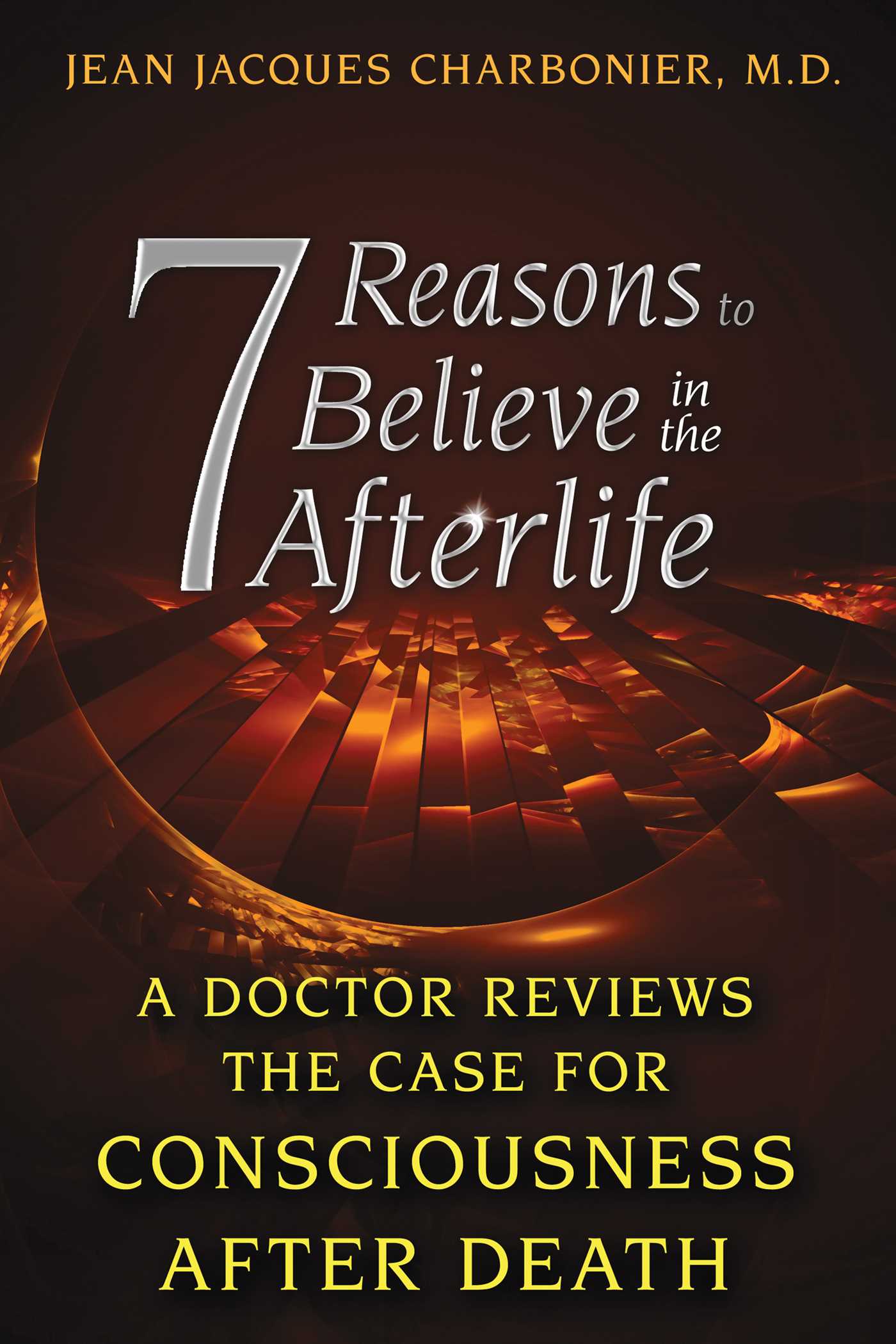 • Explores out-of-body experiences, sessions with mediums, electronic communication with the deceased, and other signs from the afterlife

Over the course of his 25-year career as an anesthesiologist and intensive care physician, Jean Jacques Charbonier, M.D., gathered hundreds of accounts of patients who returned from clinical death. Across all of these accounts--from patients with vastly different backgrounds--Dr. Charbonier found striking similarities as well as indisputable proof that these experiences were more than hallucinations. He surveyed other physicians, nurses, and professional caregivers and discovered that their patients described the same experiences as well as exhibited the same positive life transformations afterward. Igniting a scientific quest to learn more, he collected more accounts of near-death experiences as well as out-of-body experiences, attended dozens of sessions with mediums, experimented successfully with electronic communication with the deceased (EVP), interviewed hundreds of people who have cared for the dying, and gathered countless inexplicable stories of “signs” from the afterlife. With each experience he studied, he found himself more firmly believing in the survival of consciousness beyond death.

Dr. Charbonier distills his findings into 7 reasons to believe in the afterlife, beginning with the more than 60 million people worldwide who have reported a transcendent afterlife experience. He refutes the standard objections of doubters and materialists point by point, citing scientific research on NDEs and the work of pioneers in the field of consciousness studies such as Raymond Moody and Pim van Lommel.

Drawing on meticulously recorded and hospital-verified cases, Dr. Charbonier explains that we should not fear death for ourselves or our loved ones. By releasing our fear of death, we can properly prepare for “the final journey.” As those who have returned from death reveal, death is simply a transition and its lessons enable us to live more fully, peacefully, and happily in the now.

Pamela Reynold’s clinical death was medically induced by a surgical team whose goal was to remove a large aneurism lodged in her brain stem.

Dr. Robert Spetzier hesitated a long time before undertaking this operation. The risks were enormous, and yet, if he had not proceeded with this intervention, the woman was likely to suffer an early death. Her vascular tumor was like a veritable time bomb that, as it enlarged, could explode at any moment.

It is worth going into detail about the preparations for Pamela’s operation to illustrate the extent to which her brain was inactive at the moment when the vascular malformation was being removed. Hypothermic circulatory arrest is a technique used in extremely serious cases and only rarely, because many patients are unable to withstand such a disruption of blood flow and die before the intervention can be completed. The procedure involves the diversion of all blood flow from the area of the operation--the brain in Pamela’s case--to a circulation outside the patient’s body. The procedure must take place in a state of hypothermia to prevent formation of irreversible brain lesions that ordinarily would form within five minutes of stopping cerebral blood flow.

Having anesthetized Pamela with a strong dose of barbiturates, the team diverted her blood flow outside her body while progressively lowering her temperature to the record level of 15.5°C (60°F). Once the blood flow had been cut off, the patient’s surgical table was tilted steeply to ensure that her brain would no longer contain a single drop of blood. As you might expect, the EEG quickly flatlined and stayed that way for almost an hour. The intervention took place without any major problems. Once the aneurism was removed, there was nothing more to do but wait for Pamela to awaken to determine her neurological state. The first surprise was that Pamela suffered virtually no aftereffect from this artificially induced cerebral death. The second surprise was even more stunning: her state of confirmed clinical death, controlled and remaining incontrovertible, in no way prevented her from observing everything that took place around her during the operation! Even with her brain completely taken offline, she was able to see, to hear, and to understand the smallest details of her surgery--a simply impossible feat if we believe that consciousness is fabricated by the brain.

I heard a mechanical noise, and it reminded me of a dentist’s drill. Then I just sort of popped out of the top of my head. In this state, I was able to see the situation very clearly. I remember that my doctor had an instrument in his hand that looked like the handle of my electric toothbrush. It had a dent in it, a groove at the top where the tip appeared to go into the handle, but when I saw it, there was no tip. I looked down and saw a box--it reminded me of my father’s box of tools when I was a child. At about the same moment that I saw the instrument, I heard a woman’s voice. I believe it was the voice of my cardiologist. She was saying that my veins and arteries were too small to extract the blood from them, and the surgeon told her to try the other side.

While in a deep coma, Pamela was able to describe the surgical instrument used to operate on her. The same for the metal box of instruments that indeed looked like a toolbox but whose depth meant that it was impossible to see into unless you were well above the level at which the operation was taking place. Moreover, Pam was able to accurately report the conversation between the cardiologist and the surgeon when her blood vessels were too flat to introduce suction tubes into them. And all this while her brain was no longer functioning. That means this patient saw without her eyes, heard without her ears, and understood without her brain! How?

The whole phenomenon is easier to believe if we accept that consciousness is found outside the body when the brain stops functioning.

What the Detractors Say

Pamela’s EEG was flat, but that doesn’t mean there wasn’t an unmeasurable residual activity.

False, because you must remember that the patient’s body temperature had been lowered to 60°F, and we know that in such a condition there is no chance of having the slightest biochemical exchange between two neurons. All brain functions are therefore out of the question.

Pamela’s sensation of leaving the body arose from a stimulation of the right temporal lobe induced by a lack of oxygen in relation to the lowering of blood pressure in the cerebral arteries and caused by the anesthetic, the hypothermia, and the draining of blood from the brain.

False, because a stimulation of the right temporal lobe would have been easily detected. We need to remember that the EEG remained totally flat for an hour and specifically during the time when the surgical instruments were taken from their container.

The contents of the surgical tool case could have been seen by Pamela when the operating table was tilted up to reduce cerebral perfusion.

False, because at the time the table was being tilted Pamela was already deeply asleep from the barbiturates and had her eyes closed, with adhesive bandages on her eyelids.

Pamela could have heard the sounds of the tools that reminded her unconsciously of her father’s toolbox and an electric toothbrush. Upon her awakening, her brain could have then put together these images buried in her memory. In the same way she could have heard the conversation of the surgeon and the cardiologist.

False, because the pulseless electrical activity (PEA) measured during Pamela’s operation was just as flat as her EEG. It was therefore impossible for her to perceive even the slightest sound at a cerebral level.
Jean Jacques Charbonier

Jean Jacques Charbonier, M.D., is a writer and lecturer whose 25 years as an anesthesiologist and intensive care physician led him to investigate near-death experience and the survival of consciousness after death. He lives in France.

“At last, summary of NDE research and phenomena from someone on the front line of life and death, an intensive care physician. This book is fascinating and scientifically sound while also being easy to read, personable, and humorous. It should become a classic.”

“Dr. Charbonier teaches us that the brain is the link between the soul and the physical body and that it represents a set of structures optimized to create, record, and/or change patterns.When your brain dies your consciousness continues. Death is a transition to another life not an end in itself. When you are‘supposedly’ dead; you are more alive than before!”

– The Rev. Karen E. Herrick, Ph.D., president of the Academy of Spirituality and Consciousness Studies

“7 Reasons to Believe in the Afterlife presents seven perfect reasons to believe and to know that you are more than your body. Charbonier’s book should be compulsory reading for every poor skeptic who still believes that he disappears when his brain stops.”

– Ervin Laszlo, author of The Immortal Mind and Science and the Akashic Field

“This wonderful book provides detailed accounts of a wide variety of diverse phenomena that all point in one direction--toward the survival of the mind, with its personality and memories intact, after the change called death.”

– Chris Carter, author of Science and the Afterlife Experience

“As a researcher in the field of near-death studies since 1978, I can say without hesitation that 7 Reasons to Believe in the Afterlife is exceptional. There is nothing else in the field quite like it.”