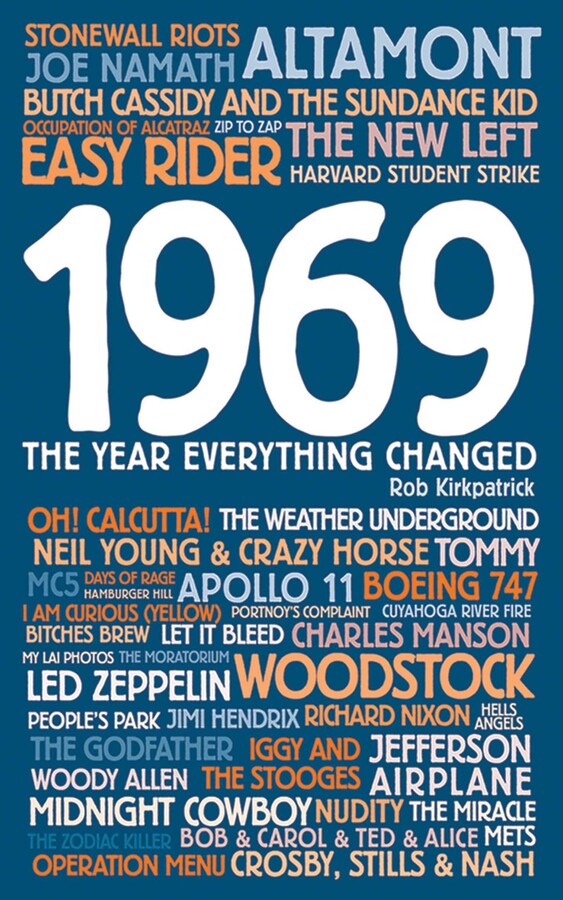 The Year Everything Changed

By Rob Kirkpatrick
LIST PRICE $24.95
PRICE MAY VARY BY RETAILER

For the fortieth anniversary of 1969, Rob Kirkpatrick takes a look back at a year when America witnessed many of the biggest landmark achievements, cataclysmic episodes, and generation-defining events in recent history.

1969 was the year that saw Apollo 11 land on the moon, the Cinderella stories of Joe Namath’s Jets and the Miracle Mets,” the Harvard student strike and armed standoff at Cornell, the People’s Park riots, the first artificial heart transplant and first computer network connection, the Manson family murders and cryptic Zodiac Killer letters, the Woodstock music festival, Easy Rider, Kurt Vonnegut’s Slaughterhouse-Five, the Battle of Hamburger Hill, the birth of punk music, the invasion of Led Zeppelin, the occupation of Alcatraz, death at Altamont Speedway, and much more. It was a year that pushed boundaries on stage (Oh! Calcutta!), screen (Midnight Cowboy), and the printed page (Everything You Always Wanted to Know about Sex), witnessed the genesis of the gay rights movement at Stonewall, and started the era of the no fault” divorce. Richard Nixon became president, the New Left squared off against the Silent Majority, William Ayers co-founded the Weatherman Organization, and the nationwide Moratorium provided a unifying force in the peace movement.

Compelling, timely, and quite simply a blast to read, 1969 chronicles the year through all its ups and downs, in culture and society, sports, music, film, politics, and technology. This is a book for those who survived 1969, or for those who simply want to feel as alive as those who lived through this time of amazing upheaval.

Rob Kirkpatrick is a literary agent, editor, and author. He is the author of Magic in the Night: The Words and Music of Bruce Springsteen and Cecil Travis of the Washington Senators, and the editor of The Quotable Sixties. His creative writing has been published by Aethlon and Slow Trains. He has published the books of many well-known authors.

The Year Everything Changed

By Rob Kirkpatrick
LIST PRICE $24.95
PRICE MAY VARY BY RETAILER