Greg Brenneman, one of the world’s leading business turnaround executives, now serves as Chairman, President and CEO of the private equity firm CCMP, where he plays an active leadership role in executing the firm’s overall strategy, as well as coaching the senior management of its portfolio companies. CCMP and its affiliates have nearly $20B under management. Greg has led a number of dramatic turnarounds at major corporations, such as Continental Airlines, Burger King and PwC Consulting. He is a former vice president at Bain and Company and has served on the board of directors at several large firms, including J. Crew, Browning-Ferris, Continental Airlines, ADP and Francesca’s. He continues to serve on the board of firms such as PQ, Milacron, Baker Hughes, Inc.,Baylor College of Medicine and The Home Depot (where he is lead director). In 1994, he founded his own personal investment firm, TurnWorks, Inc., which has focused on corporate turnarounds. Greg holds a B.B.A. in Accounting/Finance, graduating summa cum laude from Washburn University in Topeka, Kansas. He also earned an M.B.A. from Harvard Business School, graduating with distinction. Washburn University awarded him an honorary Doctor of Commerce degree, and in 2012 he was inducted into the Kansas Business Hall of Fame. Greg has completed both the Boston and NYC marathons, and enjoys the outdoors. He and his wife, Ronda, recently climbed Mt. Kilimanjaro together. They have three adult children and enjoy mentoring high-potential young couples. They currently live in The Woodlands, Texas.

Get updates about Greg Brenneman and recommended reads from Simon & Schuster.
Plus, get a FREE ebook when you sign up! 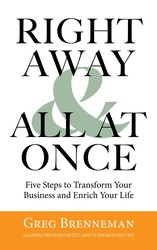