Andrew Garn is a native New Yorker who grew up oblivious to pigeons, despite being surrounded by them. After visiting a pigeon coop and a subsequent awakening in 2008, he has been photographing, rehabilitating and observing Columba Livia on a daily basis. He has exhibited photographs, video installations and sculptures of pigeons at A.M. Richard Fine Art in Brooklyn, NY and OK Harris. Documenting the entire spectrum of development, including full-grown pigeons, newborns, babies and "squeakers," Garn has grown to love these birds. Mr. Garn is a fine art and editorial photographer whose work has been widely exhibited and appeared in the pages of numerous magazines including the New York Times Magazine, Fortune, Forbes, Interview, Vogue, Vibe, Time, Newsweek, Der Spiegel, French Photo, Elle Decor, New York and Bloomberg LP. He is also the recipient of grants from the New York State Council on the Arts, the Graham Foundation, the National Endowment for the Arts, and the J.M. Kaplan Fund. He was awarded a Fulbright scholarship in 2013 for his work documenting Stalin-era industrial plants in Siberia. His previous books include Exit to Tomorrow: The History of the Future (Rizzoli, 2007), Subway Style: Architecture and Design of the NYC Subway (Stewart, Tabori & Chang, and the MTA, 2005), winner of New York Society Book Award, The Houseboat Book (Rizzoli/Universe, 2003), and Bethlehem Steel (Princeton Architectural Press, 2000). Rita McMahonis the founding director of the Wild Bird Fund, New York City's only wildlife rehabilitation and education center. The non-profit veterinary facility treats over 5,000 birds a year. Emily S. Ruebis an editor for theNew York Timesmetropolitan section. She writes regularly on avian subjects and was the creator of Bird Week and the "Hawk Cam" which chronicled the lives of a red-tailed hawk family in Washington Square Park.

Get updates about Andrew Garn and recommended reads from Simon & Schuster.
Plus, get a FREE eBOOK when you sign up! 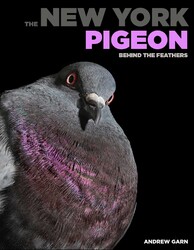